The Ferguson protesters found the perfect way to stick it to the racist white man: by looting, rioting, and burning down businesses in black neighborhoods! This completely intelligent and not at all idiotic mindset was on display in newly released surveillance footage from November, when a mob of 180 people robbed a convenience store near Ferguson. 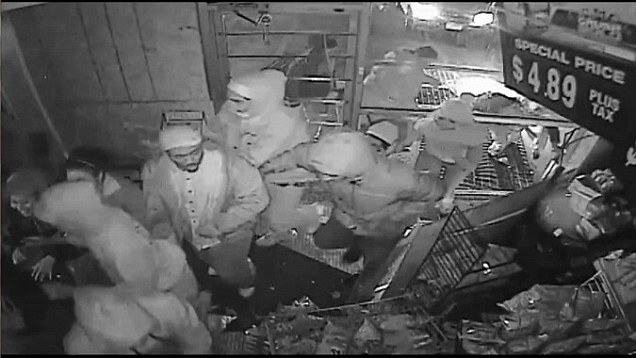 Police in St. Louis have released surveillance footage of a mass robbery underway at a convenience store near Ferguson, Missouri. The video was released in hopes of identifying suspects.

The mob of 180 ransacked the store on the same day a grand jury decided not to indict the police officer that shot and killed Michael Brown.

The newly released video shows the Dellwood Market being robbed on November 24, 2014.

Because acting like animals who destroy businesses in minority neighborhoods, that’ll magically punish those racist white cops who had the gall to defend themselves! Maybe next, they can try cutting off their own noses — you know, to spite their face. That makes just as much sense, right?