WATCH Protesters Turn Into SPEED BUMPS – This Driver Has NO Patience For Their Nonsense!

The May Day protesters in Durham were in a blocking traffic mood and came up with the idea to march down to City Hall and read a list of their demands last Monday evening. A problem occurred when they decided to block a truck from passing, expecting everyone around them to comply with their communist tactics…but one determined driver wasn’t taking it.

A group of whiny, selfish protesters went up against[1] the driver of a pickup truck and a trailer in downtown Durham. Amazingly, this happened because idiot protesters outside the Durham County Jail were on the road, blocking vehicles from passing by. 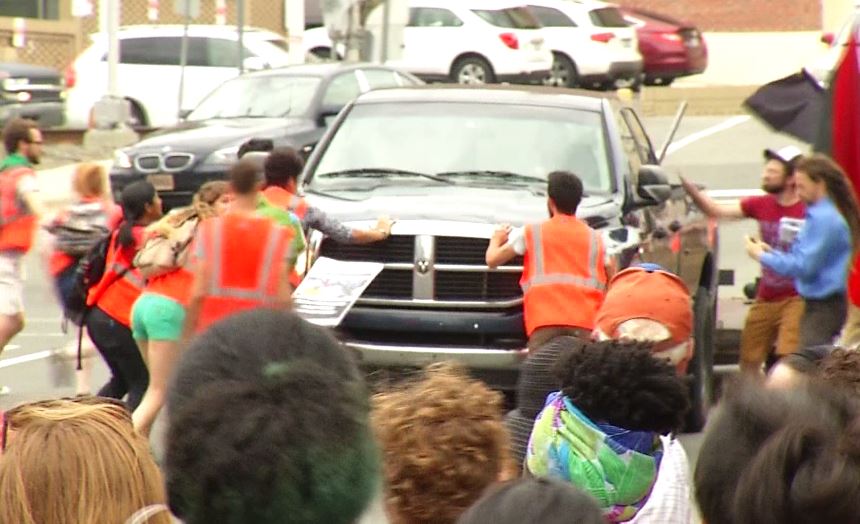 By what we can see, the truck’s driver used caution to slowly at first drive through a group holding up a banner, not stopping even a bit to appease these angry little children. Although that didn’t stop a dozen or so of them from attempting to push the truck to a stop.

…When idiots have a little power, they think they are superman.

One of the group’s appointed ‘safety marshals’ was one that actually tried to block the truck from moving forward and described the moment as ‘scary’.

Christine Hawn had this to say:

“There were kids there and people with different mobilities that were not able to pick up and move.”

Here’s how you fix that, Christine – get the hell off the road.

In time, science and horsepower won the day and the truck broke through the gathering and carried on its merry way. No one was hit, or ran over…but they were ‘scared’.

The group quickly found their commie composure and focus and went on marching for their glorious, Marxist issues. Those issues included worker rights, raising the minimum wage, rights and protections for immigrants and for better treatment for criminals that go to prison. You can’t make this stuff up, folks.

In John Hawkins’ new book, ‘101 Things All Young Adults Should Know’, he teaches in number 70, “When it comes to life, your attitude should be, ‘If I didn’t earn it, I don’t deserve it.'”

Now that’s something these children need to learn. Handouts and whining about how everything is so oppressive is a sure way to make sure you never get anywhere in life…It makes you a confused loser.