WATCH: The Terrifying Moment A Blood-Covered Man Tried to Kidnap A Woman’s 2-Year-Old Niece, All Caught on Camera

A crazed lunatic trying to snatch a baby out of your arms would be terrifying enough. But for this family, the person who tried to kidnap a two-year-old was a man completely covered in blood, turning what was scary enough into something out of a nightmare. 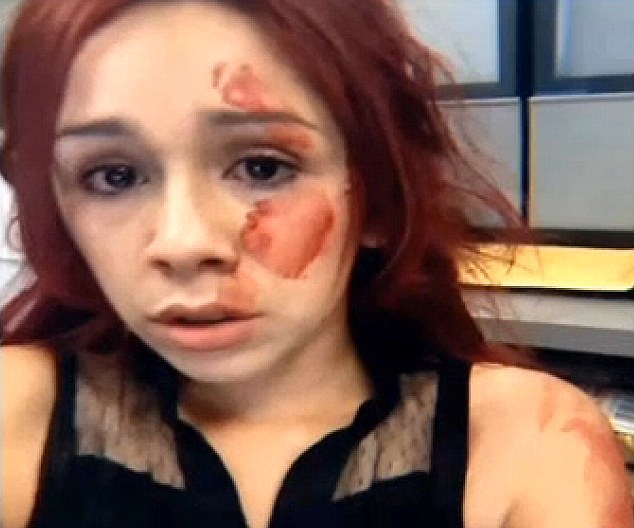 This is the terrifying moment a Los Angeles man covered in blood attacked three women and tried to steal the toddler that was with them.

The Riverside Press-Enterprise reports that police say the 30-year-old man was yelling and cussing at Civic Plaza Park visitors on Tuesday afternoon.

He first yelled at and assaulted a skateboarder and repeatedly kicked the man’s dog.

Sheriff’s officials say the LA man then followed two women and a grandmother holding her two-year-old granddaughter into the nearby City Hall.

The group of four ran to find safety.

Police say the assailant hit the grandmother and tried to take the child.

But the two other women began striking him with chairs to protect the elderly woman.

The woman’s daughter, Jessica Corrales, 24, filmed the scary incident on her phone.

She told CBS Los Angeles that she sprang to action when she saw the man assaulting her mom.

‘I just saw my mom with blood on her… And my niece.

‘So then I said, OK, somebody needs to do something.

‘So I saw some folding chairs, I picked up the chair and I just started beating him with it.’

Corrales said the man was crazed, was trying to rub his blood on them, and was repeatedly hitting the women as well.

‘He looked like a zombie,’ Corrales told the network.

The man, Reginald Peralta, was bloody after he had repeatedly attacked other people, including a skateboarder who hit him over the head with the board. This guy apparently needs to get a psych eval, stat, because running around after people trying to smear blood all over them while attempting to kidnap toddlers clearly shows that he must have been suffering some kind of psychotic breakdown.