Five toddlers at a motel across from an amusement park, all five years old or less, and they’re running around in soiled diapers trying to cross a highway.

Mother Of The Year[1], if she’s even the mother (we don’t know who these kids are to her). From Florida, naturally. 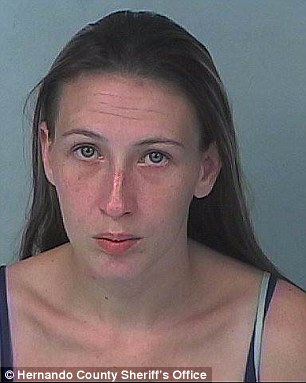 A woman has been arrested in Florida after five children in her care were found as they tried to cross a highway on their own to go to a nearby amusement park.

Samantha McCarthy, 24, of Tampa, is being held on suspicion of child neglect as the children somehow got out of the room they were staying at in a Motel 6 while she was sleeping on Tuesday morning and began to make their way towards Weeki Wachee Springs State Park by crossing a highway.

A motorist managed to stop them before they entered the highway, and found that all fine, who were under the age of five, were in heavily soiled diapers and could not reveal who their parents were or where they had just come from.

NBC News reports that deputies were on the scene for 30 minutes before McCarthy finally approached them and said she had been watching the children.

She said that she had fallen asleep and that they must have sneaked out of the room.

In addition to their soiled diapers, police were also very concerned that the younger had a ‘severe rash on various parts of her body’ which they said appeared to have been there for weeks.

Meanwhile there are prospective parents heading to the far reaches of the earth in an attempt to adopt kids and give them a good home.