Sammantha Allen, 29, has been sentenced to death after locking her 10 year-old cousin in a tiny plastic storage box in 100-degree heat.

The crime? The child stole an ICE POP.

Allen and her husband, John, made the child, Ame Deal, get into the box after being forced to do backbends and run around the house in 103-degree Phoenix heat. 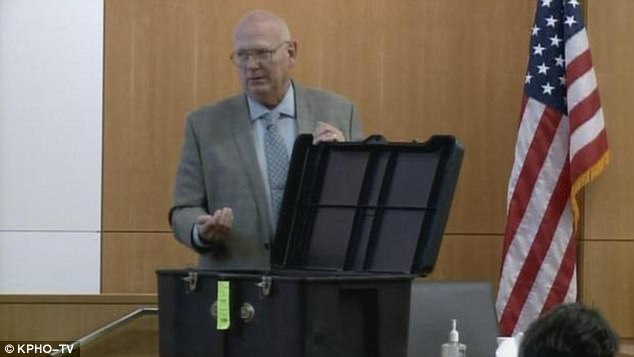 Allen has been convicted on four counts of child abuse and one count of first-degree murder for her part in the death of Deal, who she left in the small container over night. After the child, sweating profusely, was forced into the crate, it was padlocked shut so there was no chance that she could escape.

When the box was opened six to seven hours later, the couple found Ame dead. She had suffocated, as the footlocker only had two tiny holes near the handle which did not provide sufficient oxygen.

Police noted that the child’s clothes were soiled and she had marks on her knee which were attributed to “forceful contact” with the box’s lid.

Admitting to the crime, Allen said that she had believed her husband was going to let the child out before the couple went to bed.

Unfortunately, Allen isn’t the first of Ame’s relatives to be sentenced to jail time for child abuse. Her father, aunt and grandmother are all serving lengthy sentences related to the crime. All of them are guilty of abusing the young girl.

According to investigators, Ame was raised in a three-bedroom house with at least a dozen other children and 10 adults. Neighbors admitted to hearing screams from the house, but never reported them to police as they didn’t want to break up the family.

Her mother attempted to get the child back on multiple occasions, but claimed that every time she managed to find her ex’s family, they would move to prevent her from getting Ame back.

As for a bit of good news, all of the other children in the home have been taken by CPS, meaning they will no longer have to live under such dismal conditions.

Allen’s husband’s trial is scheduled to start on October 9th.