This is just horrific.[1] An elderly World War II veteran was assaulted and shoved brutally to the ground as he tried to defend the American flag in his yard from some thugs. Howard Banks heard a noise outside and went to see what it was. He’s legally blind, but he sees well enough that he could make out someone taking down the flag outside his Kaufman, Texas home. This happened back on July 11th. Just days before Howard would turn 92.

Not only did these scum bags hate the flag and went out of their way to dishonor it, they hurt a veteran who served this country with honor. Banks has had other acts of vandalism at his home as well. This time he wasn’t going to let them take his beloved flag without a fight. Previously, vandals had shredded his American and Marine Corps colors. They could see Howard, but he couldn’t see them. He turned in the other direction and they punched him from behind, knocking him to the ground. 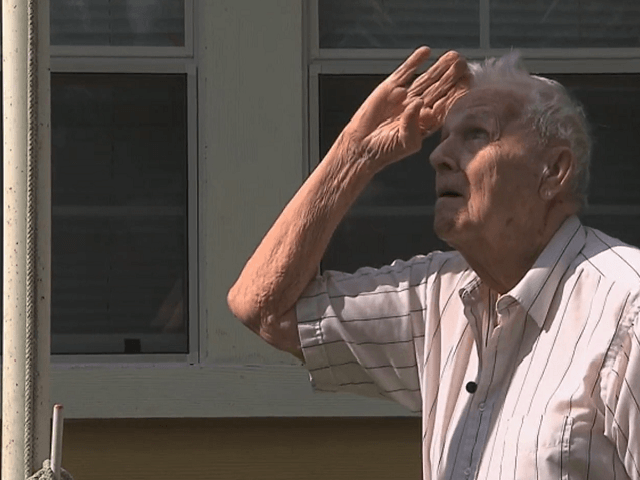 A World War II veteran suffered an injury while defending his home’s American flag from assailants who pushed him to the ground.

Howard Banks heard a noise outside his home and went out to investigate. Banks is legally blind. With his limited vision, he observed someone taking down the American flag flying outside his Kaufman, Texas, home, CBSDFW reported. The incident occurred on July 11, shortly before his 92nd birthday.

Because of prior acts of vandalism, Banks decided to defend his flag. Previous vandals shredded his American and Marine Corps colors.

“They could see me. I couldn’t see them,” Banks told the CBS affiliate. “I turned and looked in the other direction, and about then – ‘wham!’ They knocked me down.”

The attacker quickly fled as neighbors came to his aid. His efforts thwarted the attack on his flag, but a “God Bless All Police” sign had been thrown to the ground.

“It’s the one thing I can cling to. Yet at my capacity, there’s not much I can do. But I can honor our flag,” he told the reporter.

Then the cowardly attacker(s) ran as neighbors came to Howard’s aid. He managed to stop the attack on the flag, but his sign that reads, “God Bless All Police,” was thrown to the ground. He got multiple bumps and bruises from the altercation, but Howard will recover. This time. It could have ended much worse if that neighbor hadn’t come running when they did.

Assaulting the elderly is a felony in Texas as it should be. “I am durable. I can take it,” Howard said. The police are actively searching for those that committed this cowardly assault and are intent on bringing them to justice. They praised the veteran who joined the Marines at the age of 18 to fight the Japanese. He survived battles in Iwo Jima and other Pacific Theater locations. “This gentleman is a hero to our officers and the city’s residents should be extremely proud to have him as part of our community,” police officials stated. Yes, they should and they should hunt down those thugs and give them the personal touch.