You probably know that before the bodies of Alison Parker and Adam Ward, the reporter and cameraman for a Roanoke, Virginia TV station who were murdered by a disgruntled former coworker, were even cold Clinton had joined the typical chorus of Democrat pols climbing over the courses to demand gun control. What you might not know is this[1]… 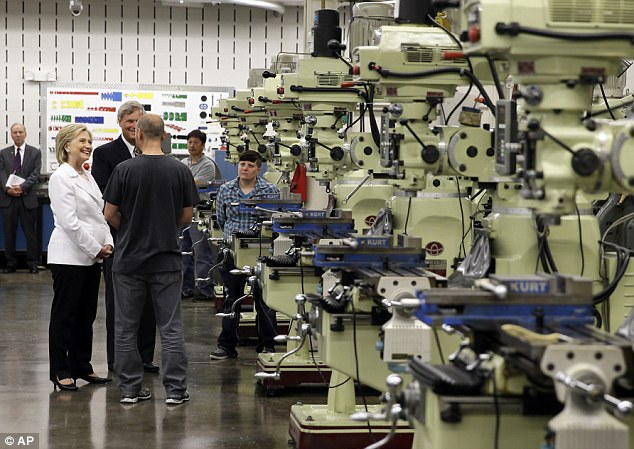 Democratic presidential front-runner Hillary Clinton lashed out at America’s gun culture on Wednesday in the wake of a double-murder that played out on live television – but made her remarks just an hour after appreciatively touring a technical college facility where students have learned how to build firearms.

Appearing at the Des Moines Area Community College campus in Ankeny, Iowa, Clinton told reporters that shootings like the one that claimed the lives of a TV reporter and her cameraman could be prevented ‘if guns were not so readily available.’

She called a series of gun homicides a case of ‘incredible killing that is stalking our country.’

The press conference followed a speech on agriculture policy, which was preceded by a tour of the two-year college’s tool and die shop, where instructors proudly told DailyMail.com – as Clinton admired the machinery – that some of their former students have gone on to become gunsmiths.

It certainly seems as though Clinton is simply going through the motions – as are many of her colleagues in the Democrat Party. Barack Obama and Virginia Gov. Terry McAuliffe both launched into demands for restrictions on gun ownership before anyone even knew the circumstances of the killings.

Vester Flanagan, also known as Bryce Williams, the fired former TV reporter at the station in question, had passed a background check before purchasing the gun which killed Parker and Ward. Virtually no gun control regime short of banning all guns would have stopped him from doing what he was doing.

That didn’t stop Clinton from bleating the party line, which is unremarkable. To do it at a community college where future gunsmiths were learning to ply their trade just makes her look like a clownish hack destined to lose.