Young Teenage Girls Set Fire To Dog While Filming – Should They Be Charged?

Don’t get me wrong. I know there are a lot of good kids out there who are upstanding, decent people… there are also too many of the opposite, who really deserve to be in a cage for the sick and perverse actions[1] they take, and this footage that shows a teenage girl from North Carolina attempting to set fire to a dog is just the latest flavor of disgusting. 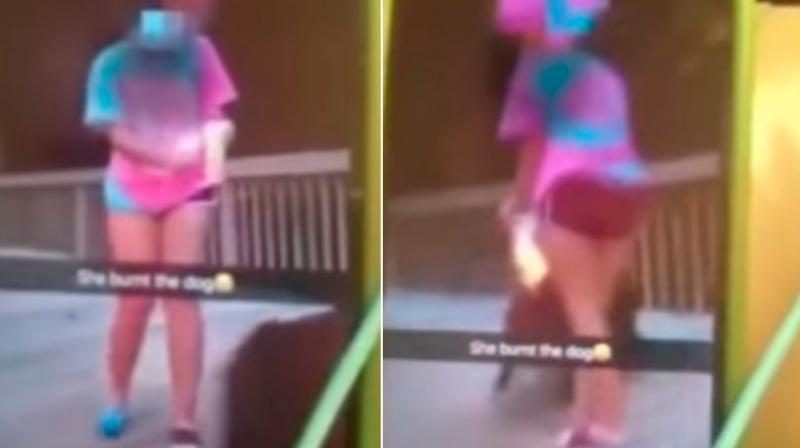 This particular teenage girl was attempting to film herself using an aerosol can and a lighter as a blow torch to light a dog on fire on a backyard deck. The two juveniles who were involved, one filming and one torching, have been identified as 13 and 14, and have yet to have any charges set against them.

Deputies are working the alleged animal abuse case which is said to have happened in Guilford County after the video was released on social media this past weekend. Animal control has already made a trip to the home to start an investigation into the matter.

The dog has been taken away from the household and is presently being held at the Guilford County Animal Shelter where it can be checked for any injuries. Officials on the case claim that the dog’s fur was charred, but its skin was left undamaged. The primary Snapchat video was posted to Facebook this weekend – and the somewhat uncaring title was: ‘She burnt the dog’.

Sgt. David Posten with the Guilford County Sheriff’s Office gave a bit of insight into the matter:

‘At this point I have no idea what led up to the act. I just know what we saw with the video. We did find some small sign of injury, consistent of singed fur.’

‘These could be very serious charges, and because of that, we don’t rush into it.’

Since no charges have been filed yet, my guess is the DA is still deciding on whether to bring up charges. I realize that these idiots are children and children are inherently foolish, but attempting to burn your dog alive? Seriously?