The passenger window on a pickup truck shattered[1] when it was hit by what the authorities are calling a “projectile.” This is the 11th shooting on a Phoenix highway in 11 days. People are seriously spooked there and have taken to driving back roads to avoid the highways. Col. Frank Milstead, director of the Arizona Department of Public Safety, says, “We’ve deployed all of the resources of the Arizona Department of Public Safety, along with resources from our federal partners at the FBI, ATF and Phoenix Police Department.” He explained that although no one has been fatally injured, all of the incidents have been “lethal encounters. If we don’t get a tip that solves this or we don’t solve it ourselves, the danger continues to go up.” Milstead added that a $20,000 reward is being offered for information leading to an arrest “This is job one for my agency, and we will capture whoever this is.” The incidents are now being labeled domestic terrorism crimes. 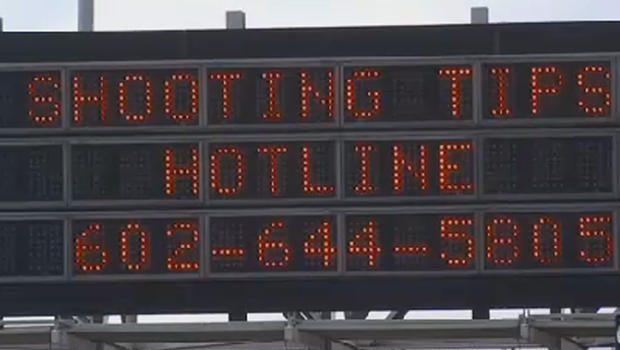 PHOENIX (AP) — Authorities in Arizona were investigating another possible shooting Thursday on a freeway in the Phoenix area, where electronic billboards are flashing warnings to drivers amid a spate of shootings that have unnerved residents across the city.

The state Department of Public Safety said a passenger car’s window was damaged when hit by an unspecified projectile on Interstate 10 Thursday morning. It’s unclear if the incident involved a shooting, spokesman Bart Graves said. Video aired by KNXV-TV showed an intact but severely cracked rear window with a visible indention.

There have been at least 10 other confirmed shootings in the last two weeks, though it’s unclear if they all are connected. Most were on Interstate 10 – one of the main highways through the city – and seven of them involved bullets, with three others involving unspecified projectiles, DPS said.

No one has been seriously hurt in the shootings, although one bullet shattered a windshield and broken glass cut a 13-year-old girl. The shootings have rattled nerves and heightened fears of a possible serial shooter, and some motorists have started avoiding using the freeways instead taking city street.

Also Thursday, a motorist reported a gunshot on I-10 several miles to the west, but Graves said there was no damage or injury so the report was unconfirmed.

“Anytime that you have multiple shootings against American citizens on a highway, that’s terrorism,” Milstead said. “They’re trying to frighten or kill somebody.” He did not elaborate.

His agency brought in the FBI, the Bureau of Alcohol, Tobacco and Firearms and local police to help. Authorities were conducting surveillance and deploying undercover detectives and members of the SWAT team and a gang task force.

Juan Campana works at an appliance business near where many of the shootings occurred. He was surprised to look up and see helicopters on Wednesday after the 10th reported shooting.

“I go through the streets when I go home,” he said.

Police have been asking for the public’s help in identifying a suspect, including putting messages on freeway billboards urging people to report suspicious activity. They quadrupled the reward Tuesday to $20,000.

Graves said officials would not discuss the surveillance or other aspects of its investigation. Police do not know if all of the shootings are connected or whether a copycat might be at work.

“We’re not going to give the nuts and bolts of our investigation,” Graves said, adding that doing so “would help the bad guy.”

Milstead said drivers are fortunate that no one has been killed or seriously hurt, but if the incidents continue, “It’s just a matter of time before there is a tragedy.”

The Phoenix shootings have brought back memories of other random highway and roadside shootings that have occurred around the country over the past decade, most notably the sniper attacks that terrorized the nation’s capital more than a decade ago.

In other cases, a man was convicted last year of terrorism charges after opening fire on a busy Michigan highway because he believed the drivers were part of a government conspiracy against him. An Ohio man took shots at several cars and houses over several months in 2003, killing one, before being caught and sent to prison.

Law enforcement officials who helped crack the cases in Ohio and Michigan described the difficult task of nabbing a suspect in highway shooting investigations.

The efforts require a large number of officers who are ready to flood an area immediately after shots are fired, said Lt. Ron Moore, who commanded a Michigan task force that investigated the 2012 spree in which 23 vehicles were shot on or near Interstate 96.

“You have to bring all the resources you can to bear on the problem – and that’s exactly what we did,” said Moore, an officer in Wixom, Michigan.

In the most recent incident yesterday, police now believe a bullet hit the rear passenger window of a white, GMC pickup. Police need the public’s help on this, because they believe it is only a matter of time until someone is killed over this. Six of the cases have been confirmed as shootings, with the others described as “projectiles” striking vehicles. Two incidents alone occurred yesterday and whoever is doing this is stepping up his efforts to hurt others. Department of Public Safety Director Frank Milstead said, “Anytime that you have multiple shootings against American citizens on a highway, that’s terrorism. They’re trying to frighten or kill somebody.” Each day brings more lawlessness across America. I sure hope they catch this guy before someone becomes a statistic.