Taste the irony…[1] The shooting comes one day after, and a few miles away from the Linwood and Pingree area where 5th District Detroit City Councilwoman Mary Sheffield launched the “Occupy the Corner Detroit” initiative to combat violence and empower residents to improve the quality of their neighborhoods. More Progressive programs that don’t work, while innocent people are gunned down by murderers – probably gangs. The police think that one person was the target and all the others were collateral damage. No one has been arrested yet. It’s a miracle that children were not shot – there were many little ones running around playing, not to mention babies in strollers. 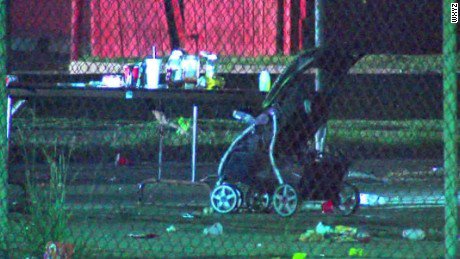 Tear down the basketball courts.

In two separate incidents, 11 people were shot in Detroit in a matter of hours Saturday, one fatally.

Ten people were shot at a block party on a basketball court at Webb and Dexter on the city’s west side Saturday night. One of those victims died.

Police do not know the reason for the shooting, and are still investigating.

Asst. Chief Steve Dolunt said it’s a miracle no children were shot as many were present during the shooting.

As of 10 p.m. Saturday, police were not releasing the identity of the person who was killed

A 46-year-old man is also in critical condition and two other men, 21 and 26 years old, are in serious condition.

Dolunt said police do not know the reason for the shooting and thus far people at the party were not being cooperative with police seeking information.

He said there was no excuse for shooting when kids were present. There were little kids and strollers, he said. “It’s a party,” he said.

This occurred right across from a church as well. Detroit has become a godless hellhole where monsters roam, preying on the helpless and innocent. And you can thank the Marxist policies of Democrats for what Detroit has devolved into. It was once a great city, with manufacturing and entertainment legends. Now it has become a desolate wasteland, where mostly the poor remain because they have nowhere else to go. Packs of thugs rove neighborhoods, gunning down whoever they feel isn’t obeying their current set of rules. It’s like Escape from New York only in Detroit. Michigan – when are you going to get your act together and kick the Progressives out of office? Does the whole state have to become Detroit before you’ll do something? Just another Saturday night in Detroit, I guess.