‘He was only 17’: Mom of joyrider who killed girl, 4, dragged from courtroom for screaming at judge over son’s ‘unfair’ sentence

I have zero sympathy for this young thug[1]. Nada. He went joyriding more than once… one time dragging an officer while trying to flee and injuring him in the process before being caught – this was after he killed the little girl. Why was he even out on bail? This spree included him jumping a curb, while joyriding in his parents SUV without a license, and crushing a beautiful 4 year-old girl to death against a building. He also severely injured her grandmother. Shame on this boy’s mother. She knows he was basically an adult and was responsible for what he was doing when he killed the little girl. He’s getting off too light for murder, plain and simple. That’s where the lack of justice lies, not in the fact that her baby boy was unfairly judged. You do the crime, be willing to do the time. 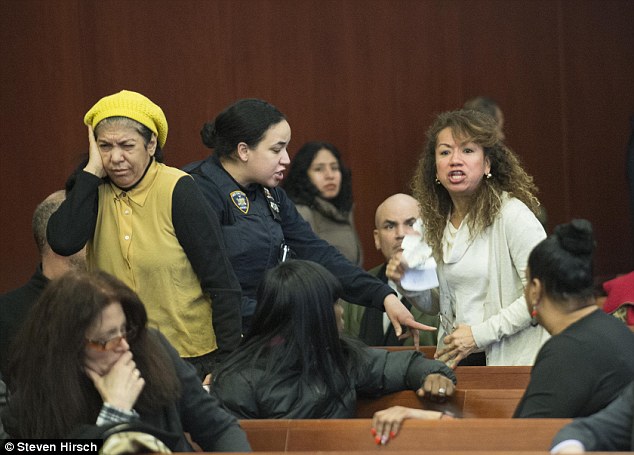 Lilia Reyes screamed at a judge on Wednesday who sentenced her son Franklin to up to nine years in prison. The teenage boy killed a four-year-old girl in 2013 while fleeing from police.

An unlicensed driver accused of killing a four-year-old girl while fleeing from police could get a lighter sentence if he pleads guilty to the top manslaughter charge – prompting a fiery reaction from the accused’s mother.

The offer prompted an explosive reaction from Reyes’ mother, Lilia Reyes, who was in the courtroom as she reportedly screamed at the judge: ‘It’s not fair! There is not justice in this country! He was only 17!’

The hysterical mother was dragged from the courtroom by police officers as the parents of victim, Ariel Russo, looked on.

She has now been barred from future hearings by Manhattan Supreme Court Justice Gregory Carro who has had previous verbal attacks from Mrs Reyes.

Sofia Russo spoke outside court to the New York Post[2], alongside her husband Alan. She said: ‘That really upset me that she would say there’s no justice, that it’s not fair.

‘Who knows better than us that it’s not fair? Our child is dead and hers is alive.’

Reyes has 45 days to accept the deal.

The judge said he could no longer treat Reyes as a youthful offender because he had been arrested twice on felony charges since four-year-old Ariel Russo was killed in June 2013.

Authorities said Reyes was fleeing officers who were trying to stop him from driving erratically while on a joyride with his parents’ SUV.

The 17-year-old fled, jumped a curb and hit a building, pinning Ariel and seriously injuring her grandmother.

In August, Reyes was charged with another crime behind the wheel – injuring a police officer while fleeing from a traffic stop.

After he made an illegal turn, the teen was pulled over by a cop but sped off, dragging the officer for about a block, injuring his wrist and elbow.

Police said Reyes was arrested after he ditched the car in a parking garage and hid in the office.

He was held without bail after his arraignment on assault and other charges.

Reyes has also been accused of taking jewelry, cash and wine from a dead woman’s apartment in July.

His attorney has said that Reyes denies taking anything and was helping his father, the building superintendent, with a plumbing leak. Reyes’ father was charged with similar crimes.

Crime seems to be a family affair here. No wonder ‘unfairness’ is screamed upon sentencing – there is no morality within this family unit. Having said that, Reyes stands for his own sins here and needs to answer for them. He’ll get out in 3 to 9 years – probably a lot sooner on parole. Little Ariel is gone forever. There are no winners here. Only loss and grief. Let some semblance of real justice be done and throw the book at Reyes. It’s only ‘fair.’ 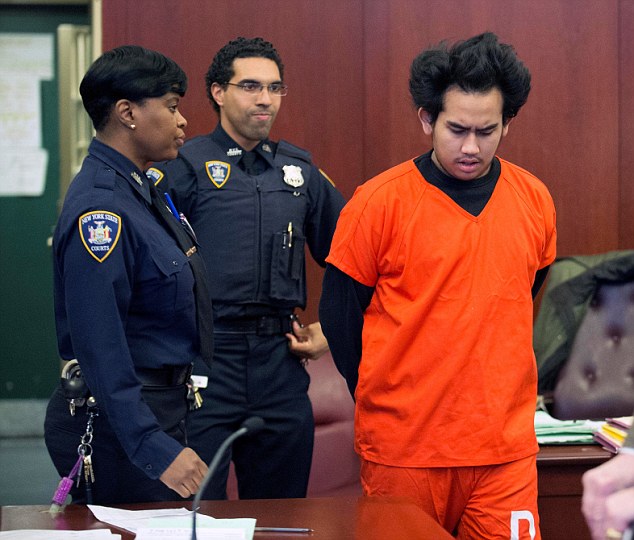 Franklin Reyes Jr, 18, pictured on Wednesday, was offered the three-to-nine year prison deal on Wednesday after running over and killing a four-year-old girl in June 2013 in Manhattan. 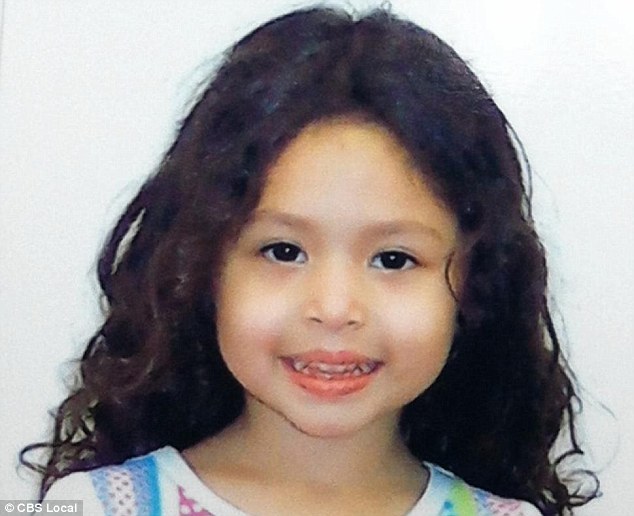 Ariel Russo, aged four, died after she was pinned to a wall by an SUV being driven by a teenage boy without a license.
Endnotes: