Wow! I remember when these lovely wonderful children were born in 1997.[1] It was a real miracle. They were the first septuplets to all be born alive and they were healthy. Now, 18 years later, they are all grown up. They don’t look anything alike and they are about to embark on their individual journeys into adulthood. It’s hard to imagine carrying seven children to term. I had trouble just carrying one twice. Bobbi McCaughey did it though and her and her husband have raised eight beautiful children. It looks like they did a fine job of it too. 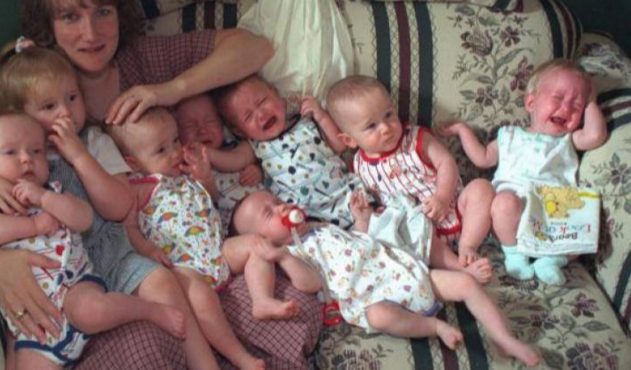 Back in 1997, Bobbi McCaughey gave birth to seven children. They all survived, making them the first known surviving septuplets in the world.

The parents were featured on the cover of Time magazine because of this miraculous story, and the children have been filmed and followed ever since.

18 years later, The Today Show caught up with Bobbi, her husband Kenny, and all seven children. The interview is very touching, as Bobbi is brought to tears at different times remembering the journey, and the children talk about what it’s like to be a septuplet. Kenny talks about how he has wanted them to be as normal of a family as possible, and so avoided reality TV shows and greater exposure. And as it seems from the interview with this family, Kenny and Bobbi have done a terrific job raising their children. Hats off to them and to their kids. Such a great story!

The family has deliberately kept the children out of the limelight and off television. That took a lot of fortitude and character as I am sure they could have used the money. The journey of raising this brood must have been a wild one, full of love and laughter and a more than a little chaos. All of them seem to be fine, well spoken young adults. They appear to be happy and well-adjusted as well. Their parents have given them priceless gifts in their journey through life. It will be hard to separate from one another, but in a way, they will always be one. The first thing I thought of when I saw this family again was the show Eight is Enough. They are just a wonderful family.