That bus driver is really a hero[1]. He did his homework by listening to police reports and then paid attention. Now a 3 year-old little boy gets to go home safe and sound because of a bus driver’s caring and professionalism. The driver has two children and he knows it could have been one of his little ones. The kidnapper has no known connection to the child and they literally had to pry the child out of his arms to take him home. The little boy was scared to death and I don’t blame him. This time there was a happy ending all because one man cared enough to do the right thing and take action. 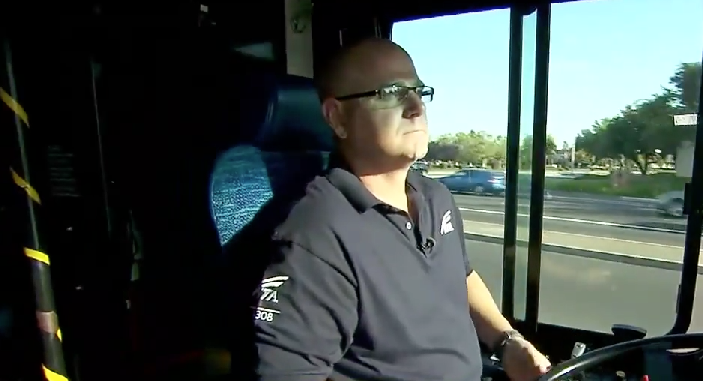 But when Watson noticed a man with a “teary eyed” little boy wearing red Crocs on his bus, his morning got a bit more complicated.

According to[2] ABC News, Watson realized the small child matched the descriptions of a police report citing a kidnapping that took place earlier that morning outside of Milpitas Public Library in California.

That’s when he devised a plan to act like he was searching for a “missing” green backpack in order to get closer to the suspected man accused of kidnapping the 3-year-old, to confirm he and the child were indeed who the police were looking for.

When Watson pulled over to search for the backpack — verifying that the child was wearing red crocs — he then secretly contacted the police, who were waiting at the next stop.

The child was safely retrieved, and his abductor, 23-year-old, Alfonso Edington, was quickly detained.

Now Watson is being called “a hero” by Milpitas police, but the father of two told ABC News[3] that he simply did “what any father would do.”

“I became very emotional,” Watson said after Edington was arrested. “This could have been my child that was abducted.”

Thankfully, the young child was returned to his family physically unharmed.

When the bus driver saw the teary eyed toddler, fitting the description of a kidnap victim in red Crocs, he had the presence of mind to concoct a ruse involving a green backpack. Once he verified it was the child, he quietly called the police and had them waiting at the next stop. The whole thing ended peacefully, thank goodness. The child was snatched from a public library. No word on what the deal is with the kidnapper – whether he’s nuts or a pedophile. I’m just glad the child was rescued and now is home in his mom’s arms where he belongs. There is one mom out there who adores that bus driver today. We need more like him.