A Customer Paid for a Meal With a Bad Check 13 Years Ago. Then a Pizza Parlor Owner Opens and Reads This Letter…

What an inspirational story[1]. Only a truly good person would carry this with them this long and then do the right thing when they could. It truly gives you hope for people in general. There are very good people out there. Sometimes I forget that when I see all the horrors in the news and I have to remind myself of it. This person did just that and lifted my heart today. I wish I could buy him or her a beer as well. 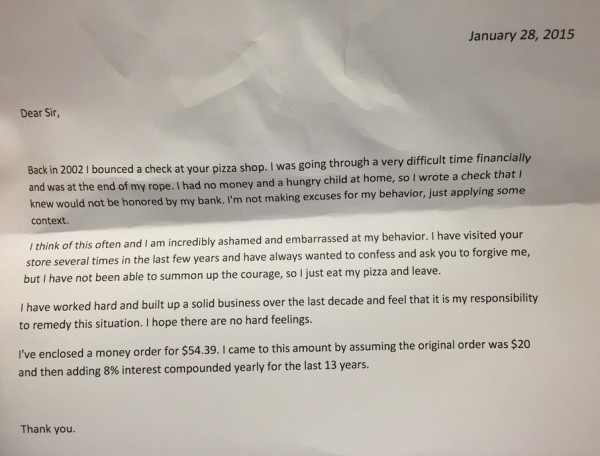 A pizza parlor customer had built up 13 years worth of guilt.

Back in 2002, the customer paid for a meal at the shop with a bad check. Then 13 years later, the customer finally fessed up in a letter mailed to the pizza parlor owner last month.

The anonymous letter writer claimed poverty and a hungry child at home as context for the deed — but also shared something else:

“I think of this often and I am incredibly ashamed and embarrassed at my behavior. I have visited your store several times in the last few years and have always wanted to confess and ask you to forgive me, but I have not been able to summon up the courage, so I just eat my pizza and leave.”

And for the grande finale, the letter writer — now on firmer financial footing — enclosed a money order for $54.39, which includes 8 percent interest compounded since 2002 on the assumed $20 food bill.

After receiving the letter, the pizza parlor owner posted a photo of it on Reddit[2], simply commenting, “I’m speechless.”

“I feel bad for the poor guy,” the pizza parlor owner commented. “I probably forgot about him when I wrote the check off as a loss and never gave him another thought. This poor dude has been dwelling on this for over a decade. If I find out who he is I’m going to have a beer with him, I’m buying.”

The pizza parlor owner added that “the guy didn’t have to do anything, this is a big showing of his character. To include interest was really generous.”

One commenter noted that the story of after-the-fact honesty made the day better: “Thank you for sharing this, it added a real spring to my step today. I like being reminded that really good people truly exist. Somedays it’s a tough thing to hang onto.”

How could you possibly be angry at someone who does the right thing? They not only paid the bill, but paid it back with interest. If only there were more people who thought this way. It’s the little things that we do from day to day that mean so much to others – a kind word, listening, a pat on the back… such small things that are everything to others. This person just wanted to make things right because they felt guilty and they did make it right. But they also lifted the spirits of thousands and encouraged others to do the right thing. Chaos Theory done right. Good for them and good for their conscience.