Justice on film – gotta love it. How iconic is it to have a good-looking family spot the bad guys who robbed them, pull their guns and take them into custody? That gives me a happy. Four thieves get caught on a security camera busting in the door of this family’s home. They steal two televisions, other items and Christmas presents, including those for a one year-old. As they are being interviewed by Fox, the younger blonde notices the rest of her family taking down the dirt bags who ripped them off. Good times.[1] 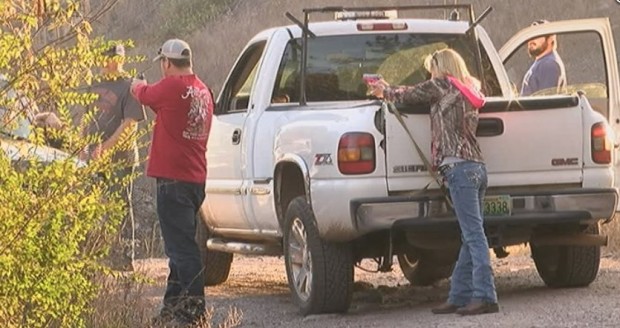 An Alabama family that had fallen victim to a home burglary last week happened to spot the suspected intruders Sunday as they drove down the street — and they didn’t let them escape.

According to WBRC-TV[3], members of the Wyatt family coincidentally spotted the three alleged intruders as the trio drove down a neighborhood road after committing yet another robbery.

Upon seeing them, the family followed their vehicle, stopped them and held them at gunpoint until police arrived on the scene.

“They tried to say that they were lost and we corrected them where they were,” he added.

Just two days later, deputies responded to another burglary where a computer monitor, trumpet knife collection and jewelry were among things stolen, WBRC reported[5], citing Chief Deputy Randy Christian. As officers investigated the crime at that house, they received a phone call from the Wyatt family notifying them the suspects were being detained at gunpoint.

Sarah Wyatt told WBRC[4] they hope they will get their stolen items back.

“Sure hope so, if they don’t at least we’re all safe and in one piece and they are off the street for now,” she said.

WBRC noted that if the detained individuals were responsible for the burglaries, there is still another individual at large since surveillance video showed two men breaking into the Wyatt residence, but only one was ultimately taken into custody.

Justice delivered via Second Amendment rights. Alabama is very much like Texas… don’t mess with them. The authorities have now caught three of the four on Candid Camera. The other guy is probably long gone. But at least the most recent family to be robbed got their stuff back. Coal in these guy’s stockings all around and a Merry Christmas to that neighborhood. I love how these morons claimed they were lost and the family informed them just where they were and where they were about to go. I nominate the Wyatt family for Family of the Year – they are what America is really about. God, guns, family and freedom.