A Woman Fell Ill At Graduation. That’s When One Student Got Everybody’s Attention… [Video]

Christian Crawford did the right thing[1] without hesitation when a woman fell ill at his graduation ceremony. He went up and prayed for her well-being. It showed he was a man of character and faith. I bet it makes the liberals foam at the mouth. What a sad statement it is today that this is considered out of the ordinary and special. Not too many years ago, it would have been the norm and expected. Now, it is cause for fame and acclaim, which is not what Christian intended. Until we can return to first turning to God in prayer, America will continue to be in deep, deep trouble. 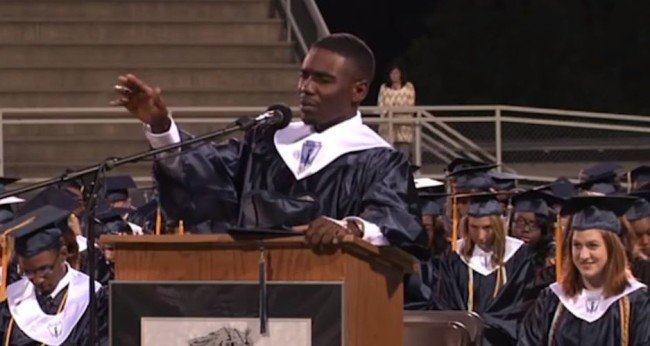 Everything at the Clay-Chalkville High School graduation was on point. There were 1,000 family members and friends in the grandstands at Cougar Stadium. The 300 graduating seniors from the Pinson, Alabama, school were arrayed on the stage.

But things were thrown into disarray when, as The Trussville Tribune[2] reports, a woman was overcome by a medical emergency and everything stopped while EMTs helped her.

Senior class president Christian Crawford knew exactly what to do. He marched to the podium, prayed for the woman and brought down the house.

Later, he took to YouTube[3] to talk about the reaction to his prayer:

I’m glad that the video is going crazy right now, but people are saying, ‘You’re famous.’ No, God is famous. It’s not about me at all. It’s all about God, and if God’s fame is being exalted because of what I prayed about, then I’m doing what God has called me to do, and that’s to make a difference.

Christian did more than just graduate last Thursday night. He showed his fellow students what it looks like when a grown up takes over.

There is a reason Christian was class president and you just saw it. He is a leader who does not second guess himself and that will make him a true mover and shaker in life, no matter what his calling is. I pray the woman was okay and I believe that heartfelt prayer truly makes the difference when someone’s life hangs in the balance. Christian Crawford (who is aptly named) didn’t just graduate high school, he became a man and a true inspiration for others his age from that podium. That happened not when he gave a graduation speech, but when he prayed for that woman and implored God to intervene. We could all take a lesson from this graduate.