At least 127 are dead[1] in Paris this morning after eight coordinated attacks by ISIS throughout the city. Hollande has declared France at war with ISIS and has closed her borders. He is vowing to strike back at ISIS over this. 100 were slaughtered at the Bataclan concert hall, then the two gunmen blew themselves up. AK-47s and shotguns were used to mow civilians down and suicide vests were employed. Grenades were tossed in people’s faces. There are now over 1,000 active ISIS probes[2] here in the US according to the FBI. This is only the beginning. As blood pooled and flowed in the streets of Paris last night, apocalyptic scenes[3] unfolded throughout the city. Multiple soft targets were hit in coordinated attacks as ISIS gloated and took credit for the atrocity. France is under their first curfew[4] since WWII in 1944. 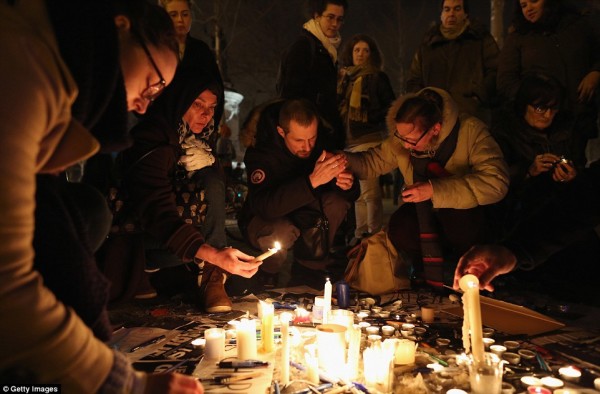 Distraught friends and family have launched a desperate search for loved ones – including a British man – feared dead in the Paris massacre after ISIS militants slaughtered 127 people in a series of attacks across the French capital.

People are sharing pictures and information about the missing on Twitter with the hashtag ‘RechercheParis’ – which means ‘search Paris’.

The hashtag has now spawned its own Twitter accounts and Facebook page, with dozens of people posting photos alongside desperate pleas for news.

Many of those missing were at the concert at Bataclan concert hall last night, where more than 80 people were killed.

Among them was Nick Alexander, thought to be originally from Colchester in Essex. The Foreign Office said it is ‘investigating’ reports of British casualties.

‘Searching for Precilla Correia, who was at Bataclan with Manu Perez,’ tweeted Bataclan (@jesuisbataclan1).

Severine Kimmel (@severinekimmel) wrote: ‘I am desperate without news of my friend Gaëlle, who was at Bataclan. Have you seen her?’

Zoe Njoy wrote on Facebook: ‘Still no news of our friend Hugo Sarrade who was at Bataclan last night… Has someone seen him?’

France was placed in lockdown after eight militants, all wearing suicide vests, brought unprecedented violence to the streets of the French capital in the bloodiest attack in Europe since the Madrid train bombings in 2004.

Francois Hollande accused ISIS of orchestrating the worst attacks in France for more than 70 years, declaring it an ‘act of war’ and vowing to ‘mercilessly’ strike back against the jihadi ‘barbarians’.

In a televised address, the French President said the attacks were ‘committed by a terrorist army, the Islamic State group, a jihadist army, against France, against the values that we defend everywhere in the world, against what we are: a free country that means something to the whole planet’.

ISIS later claimed responsibility for the attacks in revenge for French air strikes in Iraq and Syria and warned: ‘This is just the start of a storm’. It was also reported that one of the suicide bombers was found with a Syrian passport.

Police are also hunting accomplices amid fears of further attacks, with the arrest of a 51-year-old man in Germany last week after firearms were discovered in his car now being linked to the atrocities, according to media reports.

Police are also reportedly chasing a car containing four ‘heavily armed men’ who stormed through a police road block as they headed towards Paris.

Officers are said to be in pursuit of a Citroën Berlingo after it forced its way through a toll on the A10 in the Ablis area of Yvelines in north-west France.

In an indication of the heightened state of alert, it was earlier reported that armed officers and a police helicopter were scrambled to the Bagnolet area of Paris following reports of gunfire and explosions.

Residents were reportedly told to stay indoors but local authorities later confirmed the ‘explosions’ were the result of fireworks being let off at a wedding celebration.

France was in a nationwide state of emergency today after at least 127 people were killed in a series of coordinated terror attacks in the heart of Paris that have paralysed the country.

Armed with AK47 machine guns and shouting ‘Allahu Akbar’, four of the group marched into a rock concert at the Bataclan theatre, massacring up to 100 people and taking dozens hostage.

Video footage emerged of the stampede into a street behind the theatre shows concert-goers leaving a trail of blood as they drag their dying friends from the scene.

One woman clung desperately to the window ledge of the second floor as she tried to hide from the terrorists.

Meanwhile, bodies lie by the entrance – all apparently dead, before one moves and attempts to stand. Bleeding heavily, and unable to lift themselves, the camera captures the moment they try to use their phone – possibly to call for help.

The video was taken by Le Monde[6] journalist Daniel Psenny from his flat in a building opposite. He was later injured himself, shot in the arm through his window.

Witnesses reported hearing at least one of the terrorists at the Bataclan Theatre speaking perfect French.

The horror started when two suicide bombers blew themselves up outside the Stade de France sports stadium where Mr Hollande was watching the French football team play Germany.

A Syrian passport was retrieved from one of the suicide bombers who targeted the football stadium, according to two French police officers, while the second is believed to have been as young as 15 years old.

According to a woman who was in the Cambodian restaurant, a gunman shouted ‘Allahu Akbar’ (God is great in Arabic) before firing.

French prosecutors say 14 were killed and several critically injured. Eyewitnesses reported hearing a sound like fireworks before they realised the gravity of the situation and desperately tried to flee or hide.

Meanwhile the sidewalk terrace of La Belle Equipe on Rue de Charonne was showered in gunfire, killing as many as 18 people. There were reports that a Japanese restaurant on the road was also targeted.

Some 1,500 extra soldiers have been mobilised to guard French facilities while schools and universities were closed.

Many French schools are normally open on Saturdays, but the French government ordered them shuttered as part of emergency security measures.

As a precaution, all sports events were cancelled on Saturday, while access to public facilities such as museums and swimming pools was restricted.

Soldiers were deployed at key sites around Paris, including Parliament buildings and religious sites, while in a highly unusual move Disneyland Paris has been closed to the public.

The government has also re-imposed border controls that were abandoned as part of Europe’s free-travel zone.

Security checks were also reinforced outside French official buildings in various capitals including Vienna, where a international meeting on the conflict in Syria was taking place.

Governments also called for heightened vigilance from the general public.

Britain’s Foreign Office updated its travel advice for France urging its citizens to ‘exercise caution in public places’ while Belgium said its nationals should avoid unnecessary travel south of the border altogether.

‘We must be prepared for a number of British casualties,’ he said after an emergency cabinet meeting in Downing Street that kept the threat level for Britain at ‘severe’ – the second highest attacks.

In a message of solidarity to the people of France, he added: ‘Your values are our values, your pain is our pain, your fight is our fight.’

Similar meetings were being held by governments across Europe, including in Austria, Germany, Italy and Spain.

The Queen sent her condolences to the French people in a message to the president, telling Mr Hollande that she and the Duke of Edinburgh were ‘deeply shocked and saddened by the terrible loss of life’.

The Prince of Wales has condemned the Paris terrorist atrocities as ‘bestial attacks’ and said he wanted to express his ‘utter, total horror’ at what had happened.

Hospitals appeared so overwhelmed, a junior doctor called on other medical staff to offer assistance in a number of location across Paris amid reports as many as 180 people had been wounded.

They tweeted: ‘Present yourself to your nearest hospital and help in any way you can. If you are not needed at your local hospital, the following hospitals are in need of help: Bichat, Pitié Salpêtrière, HEGP, Lariboisière.’

French President Francois Hollande declared a national state of emergency following what he called ‘unprecedented terror attacks’, reinstating border checks and deployed 1,500 extra troops to the capital. Initially it had been reported that France had closed its borders.

ISIS is now calling this the ‘First of the Storm[7].’ And I believe them. They mocked France as a “capital of prostitution and obscenity.” “Eight brothers, wrapped in explosive belts and armed with machine rifles, targeted sites that were accurately chosen in the heart of the capital of France,” ISIS said in a statement, “including the Stade de France during the match between the Crusader German and French teams, where the fool of France, François Hollande, was present.” “Let France and those who walk in its path know that they will remain on the top of the list of targets of the Islamic State,” the statement added, referring to the attacks at the Bataclan concert hall and several districts in Paris. Syrian and Egyptian passports were found. One attacker screamed that this was for Syria and Allah Akbar! can be heard repeatedly. France and the world mourn today. The world war against radical Islamists just went very hot. 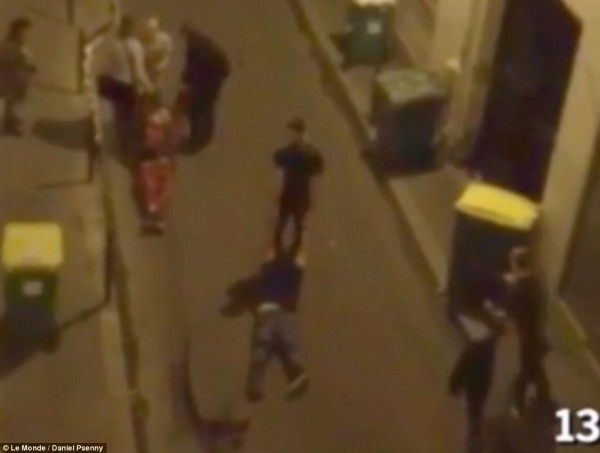 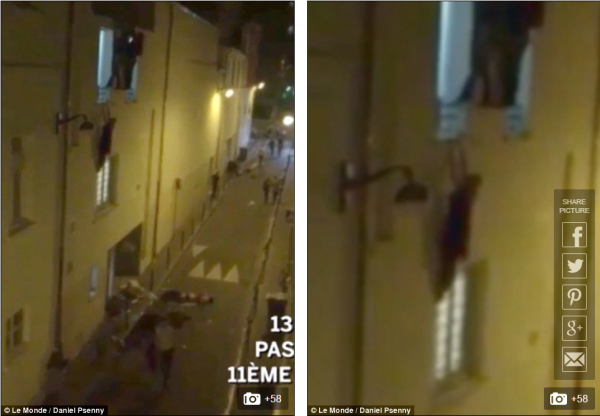 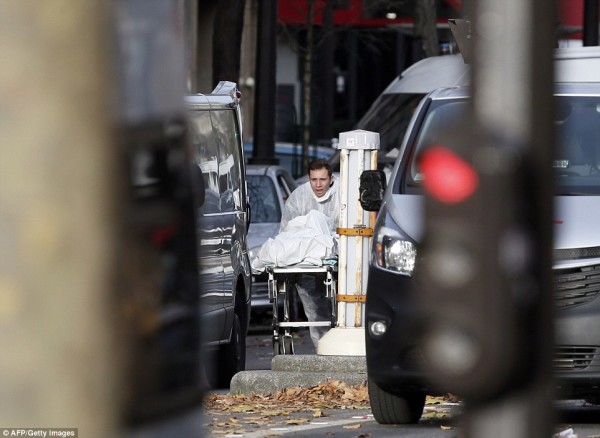 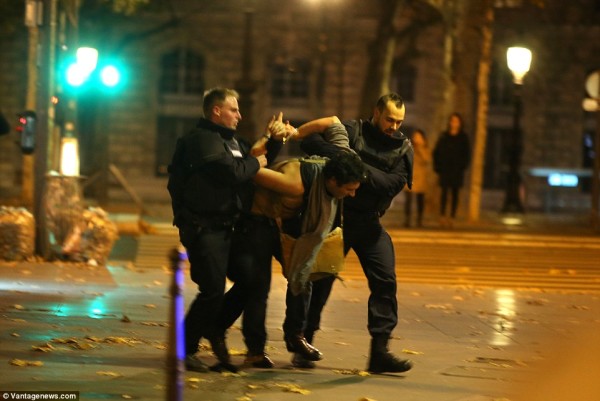 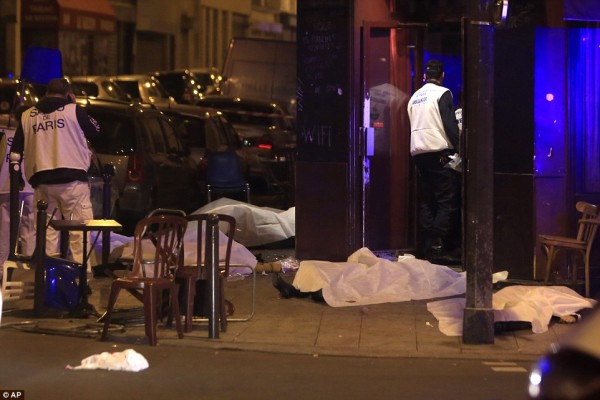 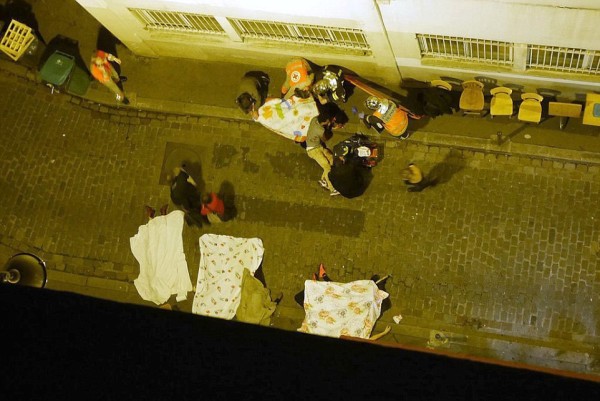 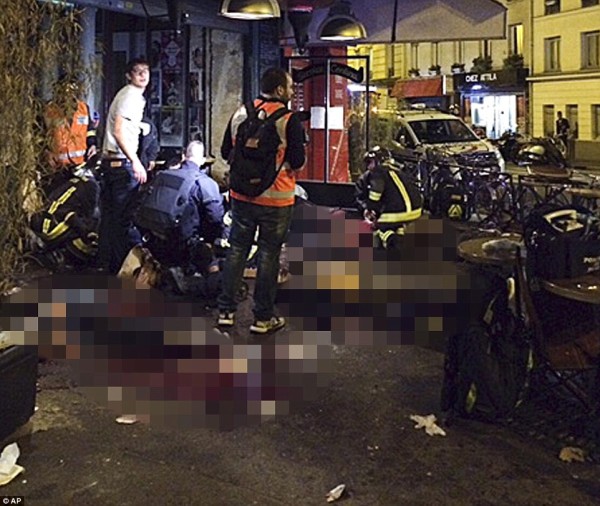 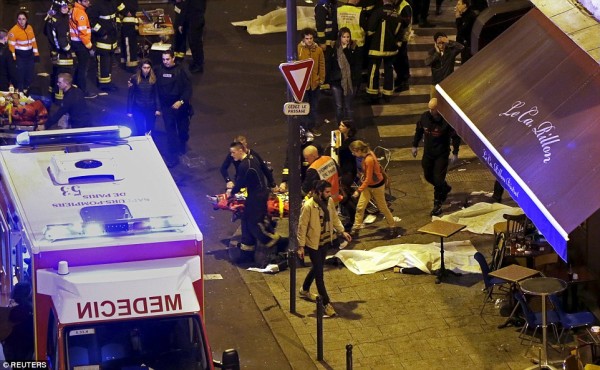 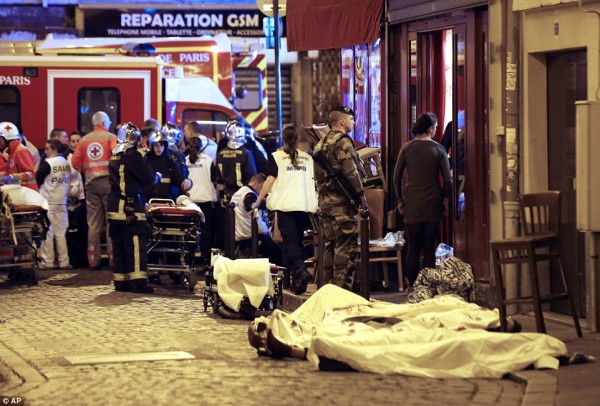 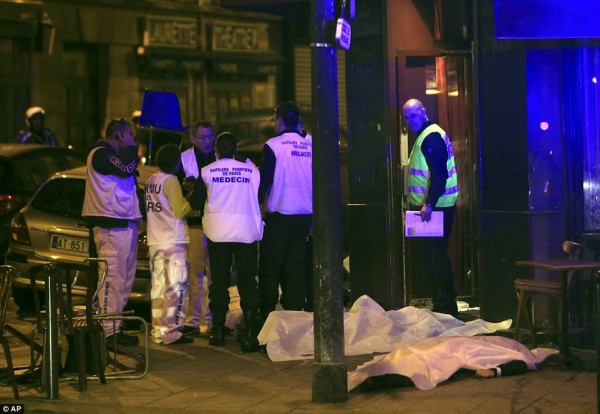 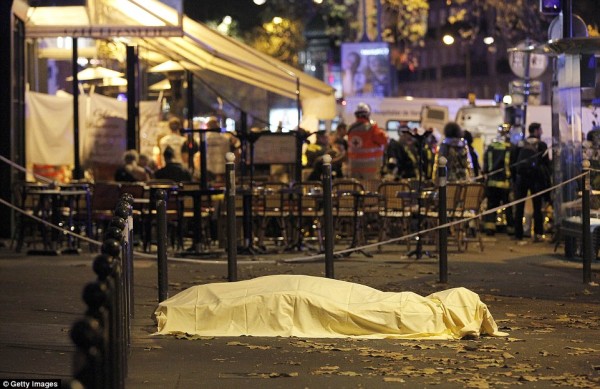 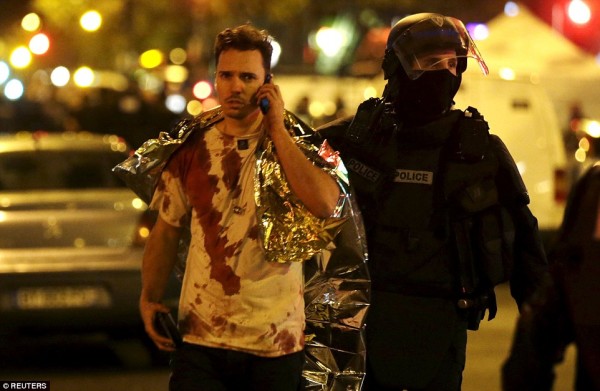 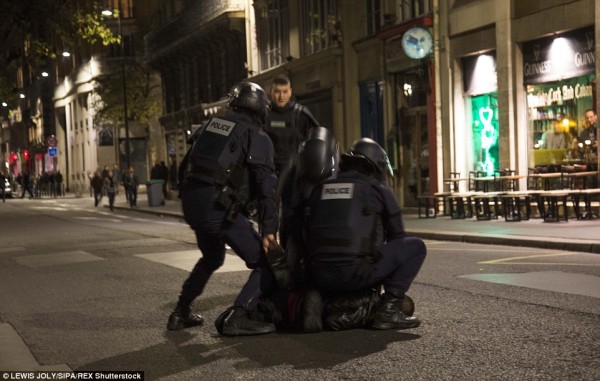 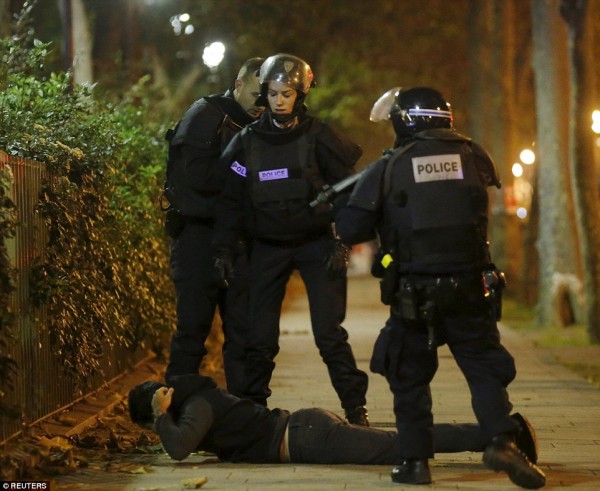 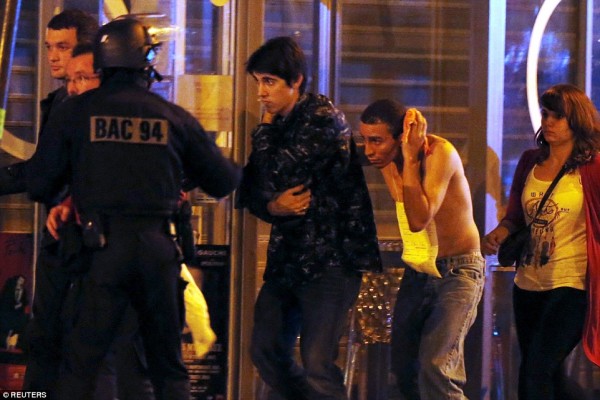 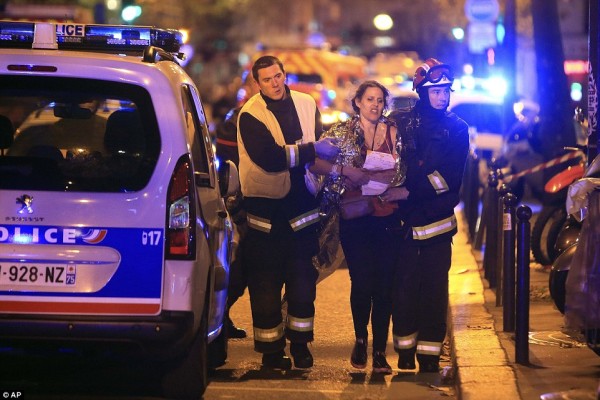 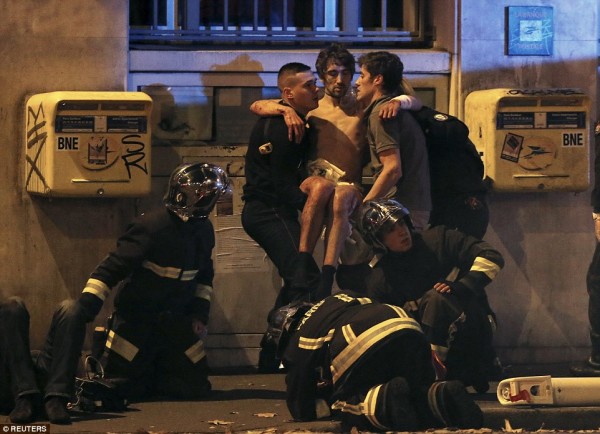 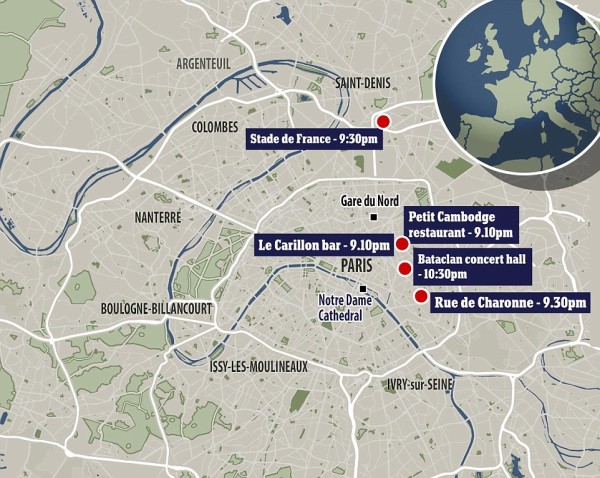 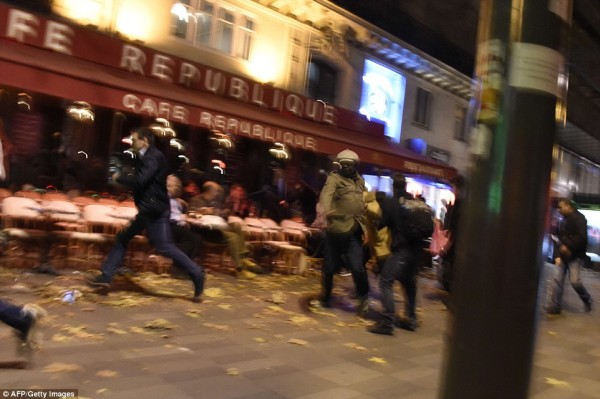 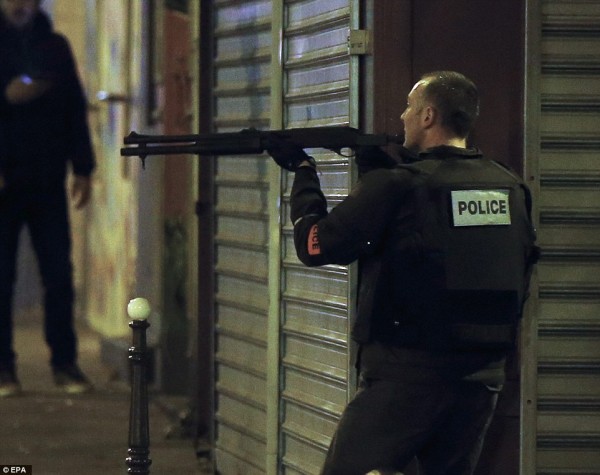 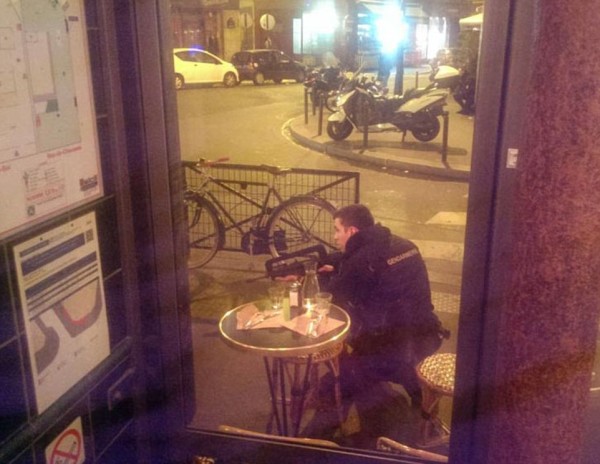 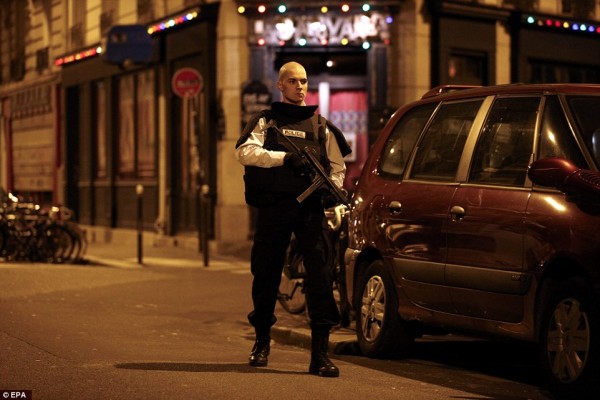 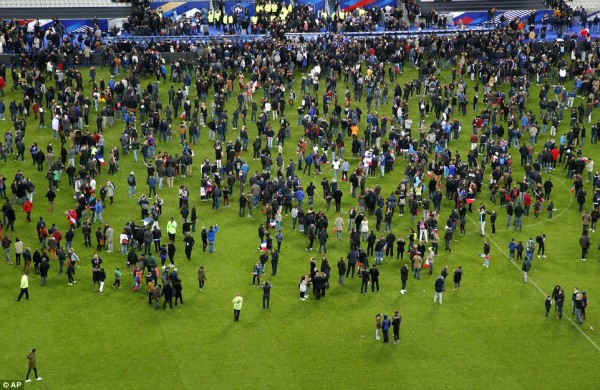 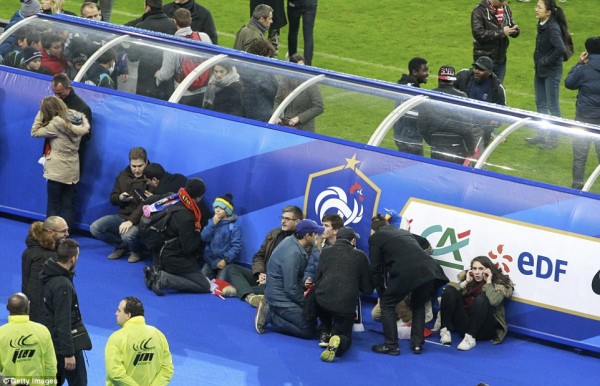 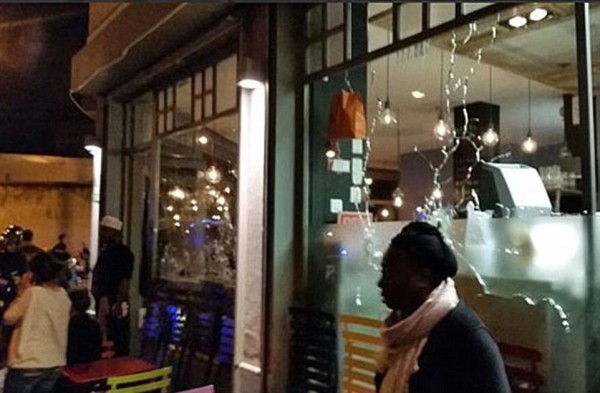 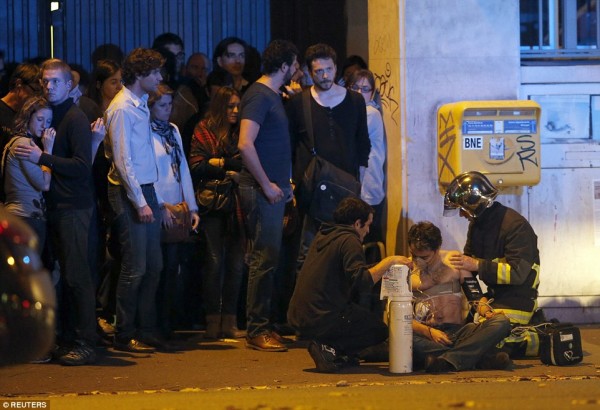