Wow… where to begin on this insanity. What they are promoting is bestiality[1]. How appropriate is it that the most homosexual mammal out there is the bat[2]. Bats also spread Rabies and Ebola[3] – just a fact. So, ergo… can we now rightfully label these perverse morons deadly, viral moonbats? Just saying. Their idea of liberation is molestation. 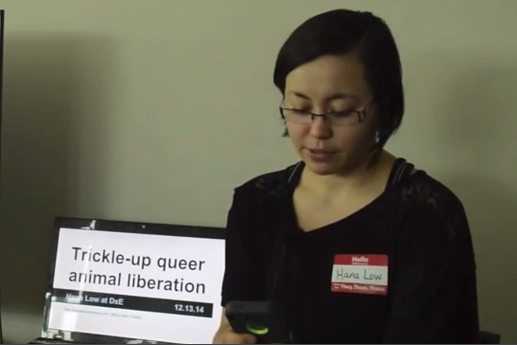 An animal liberation group called Direct Action Everywhere recently hosted an event in which a variety of presentations were given, which included titles such as “Trickle-Up Queer Animal Liberation” and “LGBTQ and Animal Liberation.”

The video compilation, posted by Daylight Disinfectant, starts off with a young, uhh, supposedly female who talks about her kielbasa, and why she didn’t have any love for the sausage. “How could I justly seek my own liberation, while denying that to others?” she pondered. She later shows a picture of her girlfriend with a “cow”, which shows them “connecting” and the cow “really enjoying himself.” “My goal is total animal, queer, and trans liberation” she says at the end of her presentation.

The next presenter talks about how animal liberation begins with your cat.

Read the rest at Progressives Today[4].

Evidently anything goes now in this Progressive, transparent society. Humans are supposedly sentient beings. I’m beginning to wonder though. If the only way these cretins can feel alive is to get it on with the nearest cow or goat, it would appear to me that humans are devolving into very degraded beings. Perverse acts such as bestiality indicate not only being devoid of morality, but a lack of general sensitivity and a zero sum of human attributes. The very definition of a Sociopath. Perhaps instead of “Hands Up, Don’t Shoot,” our motto should be “Hands Off My Cat!” Will someone please liberate me from these crazies?