Not to be outdone by the Islamic State[1], al Qaeda is rearing its ugly head against the West again. Ayman al-Zawahiri is now calling for Jihadists to unite and take the fight to American cities. This came over the Internet just a short while ago. He is basically calling for al Qaeda and ISIS to join forces to bring massive death and destruction to the US. He may say he didn’t approve of the rise of the Caliphate, but that hardly matters. It’s happening any way and I am sure he is thrilled to see it happening. Zawahiri is calling for a halt of inter-sect fighting. He wants Islamists to focus all their hate and forces on Americans. Sooner or later, Americans will get the personal touch from the Caliphate. 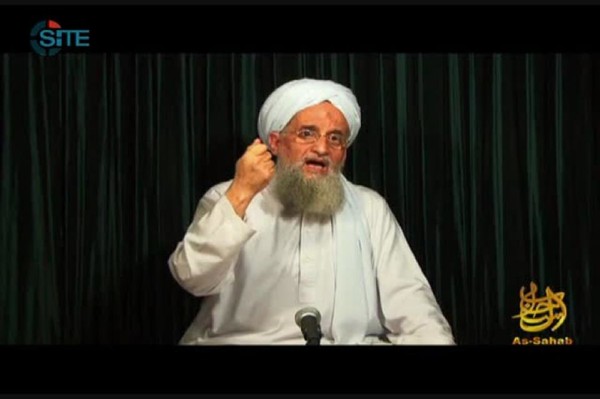 “I call on all mujahedeen (Islamist fighters) in districts of Iraq and Syria to collaborate and help each other,” said Zawahiri, who opposes last year’s declaration by the Islamic State group (IS) of a “caliphate” straddling the two Arab states.

Al-Qaeda’s chief, who is in hiding, said the decision on the caliphate had been taken “in secret and without consultation”.

He singled out five areas of cooperation: ending inter-jihadist clashes, a halt to campaigns calling for rivals to be eliminated, the creation of an independent religious tribunal to resolve differences, a general amnesty and collaboration in treating the wounded, sheltering refugees and stocking food supplies.

Such cooperation had become even more urgent because “the enemy has intensified its crusade against Islam”.

To counter the campaign, Zawahiri called for Muslims “to take the war into the West’s cities and against their installations, especially in the United States”.

He urged jihadists living in Western countries “to identify their targets… and find the means to attack, avoiding spies and moving into action”.

Al-Qaeda’s Syria affiliate, Al-Nusra Front, allied with other Islamist rebel groups, has been locked in deadly clashes with IS for control of territory in the north and around Damascus.

These demons are preparing for an apocalyptic confrontation. They are stocking food, weapons and gold. Zawahiri says the West has stepped up the fight and now is the time to strike the infidels – hard and devastatingly. He’s got the US squarely in his sights and he is calling for lone wolf attacks, as well as coordinated targeted terrorism in major cities across our nation. Cells are being called forth to undertake the fight for the Caliphate. The Chief murderer of al Qaeda urged the soldiers of Allah “to identify their targets… and find the means to attack, avoiding spies and moving into action.” I would take this psychopath very, very seriously and at his word.