Well, this is nice and hateful…[1] and extremely offensive, I might add. A San Francisco-based company named KA Designs decided it would be a swell idea to try and rebrand the swastika using rainbow colors of the gay movement. And they also sell t-shirts (or at least they did, they’ve deleted them now) that feature an imperial eagle with the swastika in the middle in a salute to the Nazi Party. So, let me see… they are pro-gay and pro-Nazi… and they are raging anti-Semites. Check. 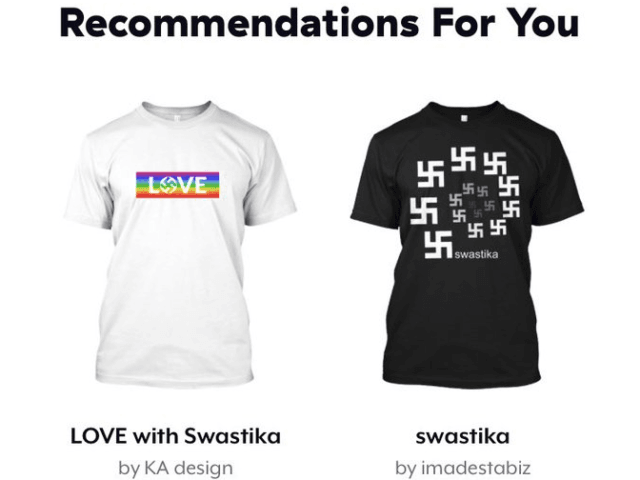 An American company, KA Designs, is selling T-shirts and sweatshirts with rainbow-colored swastikas on them, re-branding the emblem of hatred as a “symbol of love and peace.”

The company, selling through a San Francisco, California-based website called “Teespring,”has essentially attempted to rebrand the hate out of the swastika using the colors of the LGBT movement.

The T-shirts that initially made headlines in the news appear to have been removed from the website. But the screenshots remain.

The Teespring website features clothing with the swastika and the words, “Zen,” Love,” and “Peace” written on them in rainbow, black and white. It also features apparel with a rainbow-colored United States and the swastika in the “no” symbol or “prohibition” sign, titled, “Love and Peace with Anti Swastika.” Another symbol is the word “LOVE” strewn across a rainbow and the same “anti-swastika” in the middle.

The site also features a t-shirt with the heraldic eagle, also known as the “imperial eagle,” with a swastika in the middle in black and red. The t-shirt appears to be a salute to the Nazi Party.

I get that it is an ancient symbol that is still used by Hindus, Buddhists and Jains. But it has been forever tied to the genocide of the Jews by Hitler. To try and rebrand and sell it is exceedingly tone-deaf, if not downright hateful. Sorry, that’s just my viewpoint. It’s a very painful reminder of the Holocaust and now signifies hatred and evil, regardless of what it embodied before that. Next, they’ll try using the black flag of ISIS as a symbol of love and peace.

Arsen Ostrovsky, the executive director of the Israeli-Jewish Congress, wrote on Facebook Sunday that the attempt at rebranding the swastika was “obscene and disgusting.” I agree. In an interview with the Jerusalem Post, Ostrosky said, “It may have been a symbol of peace. That most certainly is not what it is primarily associated with today.” He then stated, “This is not only highly naive but grossly offensive. Despite what the left keeps saying, they keep putting forth hatred and evil like this. You can’t rebrand a symbol that represents the demonic deeds of a monster and they should know that. And they do. 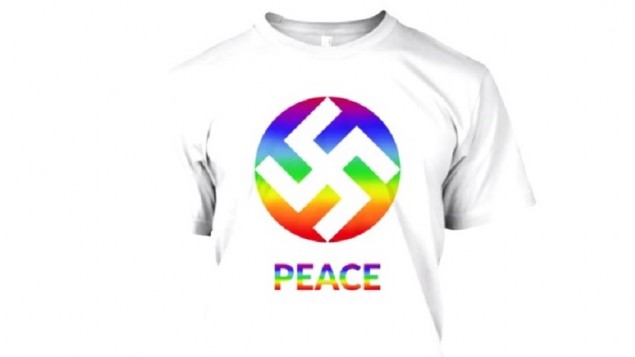