Over my dead body.[1] A school in New York is celebrating World Hijab Day and is asking all women to wear the traditional head covering of Muslims. It is a sign of submission and conversion. Yeah, I want my daughter treated like a sex slave and as something less than human. That’s how women are treated in the Ummah. Parents were not consulted over this move by the school and they are way less than thrilled over the development. Even some of the teachers are outraged over it. Jim Farnholz, who has taught for over 30 years, is quoted as saying, “This is wrong on so many levels. All religions are taught in our global studies classes. That being said, that is where understanding, tolerance and the good and bad of religion and history are taught.” This is just massively wrong. 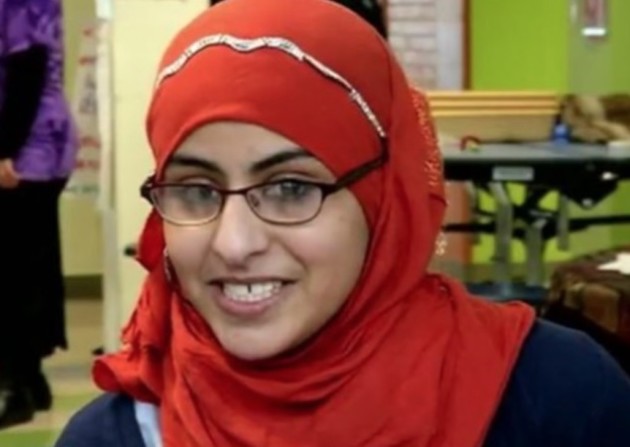 From Girls Just Wanna Have Guns:

As any liberal will be quick to point out, education and religion don’t mix. The reason, they will tell you, usually with more than a hint of impatience, is the so-called “establishment clause” in the First Amendment of the U.S. Constitution, which reads, “Congress shall make no law respecting an establishment of religion.” If you’re wondering where the words “separation of church and state” appear, they don’t.

Despite the left’s fondness for imposing that interpretation on the founders’ language, they are willing to grant exemptions, at least for the “right” religion. So when Eman Muthana, a Muslim student at the World School of Inquiry in Rochester, N.Y., wrote a one-page letter to Principal Sheela Webster asking if the school could participate in World Hijab Day, Webster gave the request an instantaneous thumbs-up, hailing the suggestion as an opportunity to practice diversity and inclusion.

Principal Sheela Webster defended the move, stating: “Our perspective in it was not religious — it was really about experiential. We are an experiential school; we engage kids in all kinds of activities and projects all of the time, so the perspective of being able to learn what a hijab is, why some women choose to wear it and why some women don’t choose to wear it, and we provide the opportunity to experience it; it is well within the protocol of experiential learning.” What utter bull crap. She’s an absolute dhimmi. When was the last time you saw a day where the students all donned Yarmulkes or a day where students wore a cross? That day will never come. But submission to Islam? Mandated. If school is a cultural event, it should encompass all cultures, not just Islam.