If you just guessed that every time someone claims to be the victim of “hate” that he or she is lying, sadly you’d be right more often than you are wrong. We should certainly condemn cruel and hateful behavior, but we should also start asking if it’s healthy for our society to celebrate victimhood so much that it keeps inspiring incidents like this[1]. 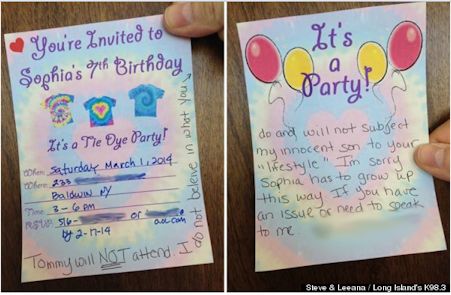 It’s a compelling story, isn’t it? A 7 year old’s birthday party invitation returned to the senders (two gay dads) with that note on it? The radio station posted that note on their Facebook page mid week this past week, and of course, readers went completely crazy over it, expressing their due outrage and offering their sympathy and support to the fathers. It spread like wildfire.

The problem with the story, though, is that Steve Harper and Deanna (last name unknown) made up the entire thing, right down to the actual invitation, which they apparently hand-crafted. And they wrote this apology note on the station’s website yesterday:

On Wednesday, we told you the story of Sophia’s birthday party, and one parent’s objection to the same-sex household of Sophia’s parents. We also posted the invitation on our Facebook page, and invited comments from our followers.

On Wednesday, we told you the story of Sophia’s birthday party, and one parent’s objection to the same-sex household of Sophia’s parents. We also posted the invitation on our Facebook page, and invited comments from our followers.

This story was, in fact, totally fictitious, and created by the two of us. This was done without the knowledge of K-98.3 management or ownership.

We were attempting to spur a healthy discourse on a highly passionate topic, but we made a mistake by misleading our listeners into thinking that this specific situation actually existed.

We are very sorry that we perpetuated this falsehood, even after it was clear that it had taken on a ‘life of its own.’ We deeply apologize for violating your trust, and we will work hard to regain that trust.

Steve & Leena? They should be immediately fired. ANYBODY at the station who knew about it from the lowliest intern to the station manager? He should be fired. These hoaxes are despicable and the people who engage in them deserve to pay a huge price for it.