Hoodlum Breaks into Home – Gets Shot By the ENTIRE Family

A man who lived less than a mile from the house he broke into[1] got the surprise of his life – the very last one as it turns out. He broke in through the back door of this home in the early hours of the morning. The father, mother and son were all armed. They fired a warning shot and the intruder did not retreat. He got to the kitchen before they all shot him dead. The guy must have been high or drunk. The officer in the video is citing the Castle Doctrine. Even though the guy was not armed, he was warned and then did not retreat. The owners had every right to defend themselves with deadly force here. 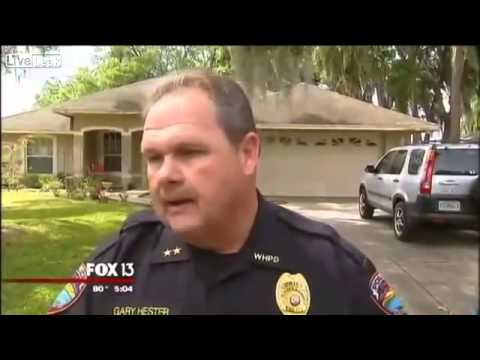 Over the past few months, Obama has been quick to leverage tragedies as a tool for his gun control agenda. Just hours after the attacks in San Bernardino, Obama was on screen telling Americans that guns were to blame.

Americans throughout the country are outraged at Obama’s lack of respect for the Second Amendment.

We’ve seen time and time again how the Second Amendment can save lives. This incredible story shows just what can happen to intruders that try to enter the home of a gun owner.

The neighbors are being very supportive of the family and say they would have done the same thing. A 20 year-old daughter was in the home, but must have been asleep until the shooting started. She didn’t see a thing. The family is not doing interviews and is keeping their mouths shut. Smart and I’ll bet they have a savvy attorney as well. If Obama had his way, he would strip us of our Second Amendment rights and we would be sitting ducks for criminals like this. Your first and best line of defense is yourself and being armed. These people took that to heart and now there is one less criminal out there. They did the right thing.