Army: We Can Provide Honor Guards For A Gay Pride Parade, But Not For A Church Service

The Army is refusing to provide[1] an Honor Guard at a Baptist church because it violates their involvement in a religious service. This is uber offensive considering that the Army just refused to provide an Honor Guard for a church whose first pastor was a chaplain in the Revolutionary Army. This is the Fourth of July for crap’s sake! So, our Army can provide an Honor Guard now for a Gay Pride parade (where there will be perversion on display for the kiddies), but not for a Baptist church honoring a Revolutionary War hero? Our nation is totally screwed up. We now celebrate depravity and deplore morality. Abilene Baptist Church was founded in 1774 – one of Georgia’s most historic churches and the second oldest in the state. The founding pastor was arrested by a colonial magistrate for “preaching in Georgia” and the first pastor, Reverend Loveless Savage, was a chaplain in the Revolutionary Army. But that doesn’t matter to the Army these days – our founding is so yesterday… two snaps and on with the rainbow! 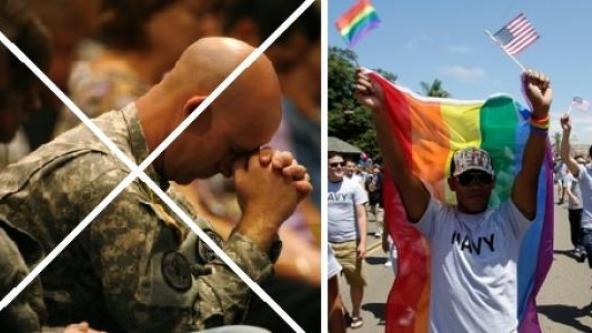 For nearly two decades, the U.S. Army has provided an honor guard for an Independence Day celebration at a Baptist church that predates the founding of the nation. But this year – that tradition has come to an end.

Officials at Fort Gordon say they will not be able to send an honor guard to a July 5th service at Abilene Baptist Church because it violates a military policy banning any involvement in a religious service.

READ THE FULL STORY AT FOXNEWS.COM[2]

While the Pentagon won’t allow an honor guard to set foot in a church, they have no problem allowing them to march in a gay pride parade.

Last year the Department of Defense gave permission for an honor guard to participate in Washington, D.C.’s gay pride parade – a historic first. An honor guard is also expected to march in the 2015 Capital Pride parade.

So if a military honor guard can celebrate gay pride in a public parade, why can’t they celebrate American pride inside a Baptist church?

Now we have male generals introducing their husbands at the Pentagon. Pastors are being forced to go against their religious beliefs and marry gay couples or leave the pulpit. Religion is banned in most public places. The IRS has a hankering for Christian blood and now this. The Army has just made a mockery of our most cherished holiday – the Fourth of July. Check one more goal off for the Marxists – the debasement of national pride and American history. The July 5th church service is scheduled to be a “God and Country”-themed celebration with patriotic music and lots of red, white and blue. Afterwards, the church is hosting a Sunday picnic – complete with hot dogs and hamburgers. But that’s offensive… instead let’s watch naked gay couples grope each other in front of our children. Now that’s American! For two decades the Army has participated in the Fourth of July at that church, but under Obama’s transformed America, that is no more. America is now a Godless nation and morally bankrupt.