I can see what the Christian church is trying to accomplish here[1] with absurdity amplification. Since Christian bakers and T-shirt makers have been forced by the government to provide for gay clientele or be shut down, Christians are now trying the same tactic hoping this will get the issue in front of the right judge and the whole violation of Constitutional rights will be thrown out. I understand it… I don’t agree with it. Two wrongs do not make a right here. Many gays stood with the Christian businesses when they were being unjustly targeted because they did not want to violate their beliefs. This is a Constitutional issue – a First Amendment issue. No business or individual should be forced by the government, individual states or the courts to violate their beliefs for political correctness. 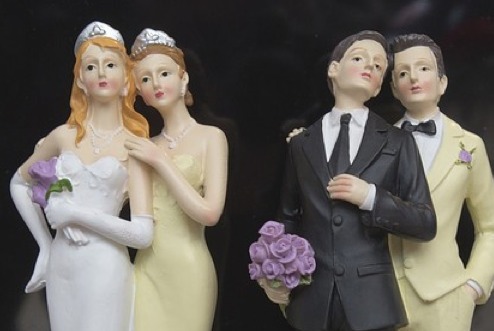 A Colorado bakery is being accused of discrimination and investigated after refusing to make Bible-shaped cakes that included anti-gay wording — a somewhat different scenario from what is typically seen when Christian bakers refuse to make cakes for same-sex weddings, but one that will certainly invoke debate over the free speech rights of business owners.

Problems began for the Azucar Bakery in Denver back in March 2014, when customer Bill Jack requested that at least one of his cakes include the words “God hates gays,” shop owner Marjorie Silva told USA Today[2].

Silva also said that the man wanted to include an image of two men holding hands, but after she saw the design concepts she declined to include the anti-gay wording or the image of the men, instead offering to make the Bible-shaped cakes without those elements.

“After I read it, I was like ‘No way,’” Silva told USA Today[2]. “‘We’re not doing this. This is just very discriminatory and hateful.’”

But Jack, who is the founder of a Christian organization[3] known as Worldview, didn’t take too kindly to that refusal, filing a complaint against Azucar Bakery with the Colorado Civil Rights Division, sparking a religious discrimination investigation into the incident. If it is determined that discrimination did, indeed, occur, the case against the bakery will move on to the Colorado Civil Rights Commission for additional scrutiny.

When KUSA-TV inquired[4] to find out why Jack had requested the cakes from the bakery and what messaging he had asked to be included on them, he declined to answer, instead issuing a short statement affirming his belief that he was “discriminated against.”

“I believe I was discriminated against by the bakery based on my creed. As a result, I filed a complaint with the Colorado Civil Rights division,” he said[5]. “Out of respect for the process, I will wait for the director to release his findings before making further comments.”

As the investigation forges on, at least one representative with a conservative, Christian group that opposes gay marriage has come out in support of the bakery. Jeff Johnston, issues analyst at Focus on the Family, a group based in Colorado Springs, Colorado, told the Christian Post[6] that he supports Azucar Bakery based on First Amendment principles.

When the government starts forcing businesses to comply with morality issues, where the government deems what is right and what is wrong, you are no longer a Constitutional Republic and you are no longer free. No business or individual should be forced by the powers-that-be to violate their religious convictions. You may not agree with what the business stands for or who they will serve, but you should agree with their Constitutional right to do so or not. Those rights are inherent to all of us and our government has no right to take those freedoms from us. It doesn’t require exemptions – it requires following Constitutional law.