Barack Obama doesn’t love this country. Never has, never will. Anyone who paid attention already knew he wasn’t patriotic. Before he was elected, Obama didn’t hold his hand up for the pledge of Allegiance. He made a big deal out of not wearing a flag pin. He sat in Jeremiah Wright’s anti-white, anti-Semitic, anti-American church for 20 years which is something no one who loved his country would ever do. He spent his first term apologizing for America and bowing to dictators.

Now, Barack Obama not only attended a concert featuring a rapper who sang these lines, he shook his hand[1]. 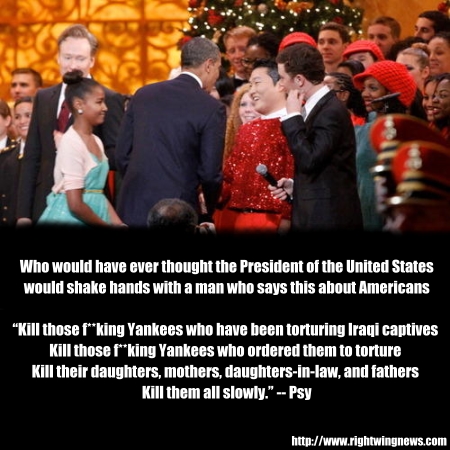 What a disgrace it is that this country has sunk so low that we have a man like Barack Obama in the White House.