And so the very public trial of Bill Cosby begins with this pre-trial.[1] Somewhere, the devil is smiling. This hearing will center on whether, as Mr. Cosby’s lawyers contend, the Montgomery County district attorney at the time, Bruce L. Castor Jr., agreed more than ten years ago that Mr. Cosby would not be prosecuted in the case. This is hardly an argument for innocence and it is obvious that the allegations are pretty much true. The victim is a lesbian which hurt Cosby’s case even more. That and the fact that he admitted to the encounter and the drugs in a deposition. Even if Cosby walks, his career is finished and tarnished forever. What a tragic end to someone that I truly admired at one time. It makes me ill. 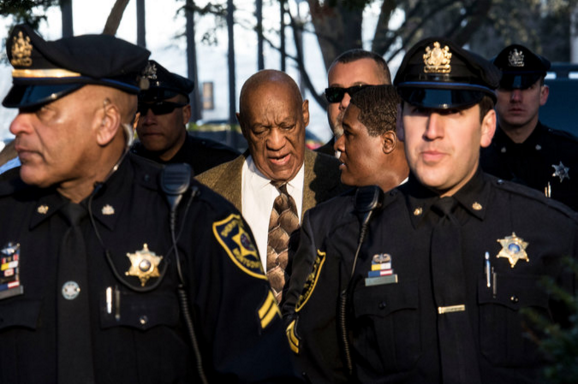 NORRISTOWN, Pa. — Bill Cosby[3], smiling and wearing an olive suit, arrived at the Montgomery County courthouse in Norristown, Pa., on Tuesday morning around 8:50 a.m. for the first hearing since he was charged in December with sexual assault.

Surrounded by policemen and flanked by two men on either side who helped him by the arm, Mr. Cosby, 78, walked slowly up the ramp toward the main entrance of the historic courthouse, clutching a cane in his right hand. He made his way into the main courtroom, where he was greeted by his lawyers, Monique Pressley and Brian J. McMonagle.

Dozens of women have come forward to accuse Mr. Cosby of sexual assault, but this is the first time he has faced criminal charges, and the hearing could prove critical in determining whether the case can proceed.

The criminal charges stem from accusations by Andrea Constand, who said that Mr. Cosby drugged and sexually assaulted her at his suburban Pennsylvania home in 2004.

Per the NYT, Mr. Castor, who said in 2005 that he had found “insufficient credible and admissible evidence” to bring charges, is expected to testify as a witness for the defense, which has asked that the charges against Mr. Cosby be dismissed. The newly elected district attorney, Kevin R. Steele, has said his office can find no evidence of such an agreement and that, even if one had been made, it would not bind Mr. Castor’s successors as district attorney. If Cosby is ruled against, things could go from bad to worse. If convicted of the current charges, he could get five to ten years in prison and a $25,000 fine. Even after this, he faces a whole raft of civil suits from tons of other women who claim he assaulted them. Definitely an inglorious way to exit stage left.