I’m very Libertarian when it comes to Gay issues. Live and let live as long as you don’t force your lifestyle on me or down my throat. Television crossed that line long ago. It seems wherever you look, the shows are either pandering to Gays or to race and I find it detestable. I can relate to Crystal’s feelings here[1]. I don’t particularly want to know what anyone does in their bedroom. Period. Crystal is pointing out the obvious – all of us are forced into accepting certain lifestyles and morality choices whether we like it or not in most of the shows we watch. We can either quit watching them, or ignore the propaganda. It’s a pity our children for the most part don’t have that choice or the wisdom to know what is dogma pushed by the State and what is simply entertainment. Indoctrination en masse is now TV du jour.

One of television’s pioneers in bringing gay sex to America’s small screens is getting a little sick of the consequences.

Billy Crystal, who played an openly gay character on ABC’s “Soap,” a parody of daytime soap operas that ran from 1977 to 1981 , told a panel of the Television Critics Association in Pasadena on Sunday that the push to get gays on television is going too far, according to the Huffington Post.

“Sometimes I think, ‘Ah that’s too much for me,’” Crystal said. “Sometimes, it’s just pushing it a little too far for my taste and I’m not going to reveal to you which ones they are.”

There’s certainly no shortage of candidates. Mainstreaming gay characters has been a staple of television for years now, whether it’s the comedy “Modern Family” (and you know what makes it “modern”) or the drama “Orange is the New Black” and a bunch of shows in between.

The problem, Crystal said, is that the pendulum has swung too far – from the era when his character was automatically a laugh-line because of his sexual orientation to now, when audiences might feel like they’re having an alternative lifestyle pushed into their lives, whether they want it or not.

During the “Soap” days, Crystal said,

“There were times where I would say to [the actor who played his boyfriend], ‘Bob, “I love you,’ and the audience would laugh nervously, because, you know, it’s a long time ago, that I’d feel this anger. I wanted to stop the tape and go, ‘What is your problem?’…

“And now it’s just, I see it and I just hope people don’t abuse it and shove it in our face — well, that sounds terrible — to the point of it just feels like an everyday kind of thing.”

Naturally, the remarks made him no friends among the gay-friendly types most likely to be reading about the Television Critics Association.

But he wasn’t completely without support. 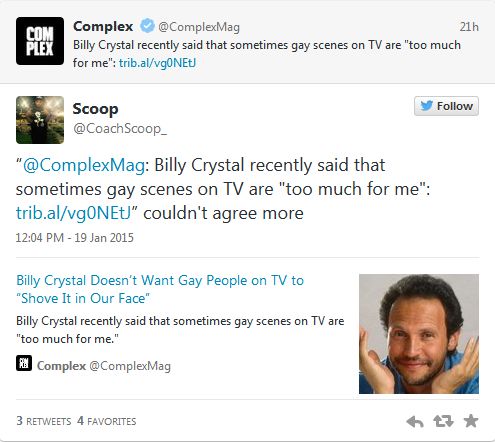 I have a number of friends in Hollywood. There are good and bad people there, just like everywhere else. But politics is wielded like a sledgehammer in Tinsel Town. Pity the artisan who gets in the way of that political agenda. You can time their career with an egg timer. It’s why Hollywood looks so Liberal. The Gay agenda there is aggressive. Most Americans believe you should have the freedom to live your life as you choose as long as it does not harm others. You cross that line when you force and inflict your political and sexual views on us and our families. The propaganda on this subject, as with so many other Progressive issues, has moved into the realm of distasteful, gauche and monopolistic. I’ve got an idea! Let’s do a new series entitled “The New Less, Is More.” Should be a winner – it will bring mystery and class back to the boob tube.