Sheriff Clarke is exactly right here.[1] How would everyone like it if someone did a song honoring the KKK at halftime? That’s akin to what Beyonce did honoring the Black Panthers and Malcolm X the way she did. Black Power my foot. It was sheer racism and cop hatred on display and it was simply evil. The FBI labeled the Black Panthers as the greatest internal threat to our nation at that time. Malcolm X was a member of the Nation of Islam, headed by uber racist, Louis Farrakhan. Malcolm X was also a radical Marxist racist. Beyonce seems to have a lot of black pride alright… she’s proud of black criminals and thugs, radical revolutionaries, Islamists, racists, sexual deviants and anything and everything that smacks of degradation. She disgusts not only Sheriff Clarke, but me as well.

Beyoncé’s halftime performance at Super Bowl 50[3] in Santa Clara, California, this weekend turned a lot of heads, and not in a good way. The pop superstar decided to perform “Formation,” a song with an anti-cop sentiment that drew fire from those in law enforcement and their supporters.

That wasn’t all, though; far from it. Beyoncé had her backup dancers[4] dress in suits reminiscent of those worn by the Black Panthers, and at one point, she had them get in an “X” formation to pay honor to black revolutionary Malcolm X.

Needless to say, this didn’t make too many people in the law enforcement community happy — including one of our favorite lawmen, Milwaukee County, Wisconsin, Sheriff David Clarke.

Police were outraged over Beyonce’s performance and I’m not surprised by that. Michelle Obama dressed to salute the same racist theme. So did Bruno Mars, who I am very disappointed in. I heard he was a good guy. This performance should never have been approved and surely it was the blackest football team in history, the Carolina Panthers, who saw that it was sanctioned. Because Beyonce is black, she got a pass. That’s unjust in the extreme. Those same cops gave her an escort to that game and protected her while she was there. For their efforts, she insinuated they were killers. That arrogant hatred is despicable. She’s definitely aligned with Jay Z and Kanye West on these issues. Many people boycotted the halftime celebration, if not the whole game over this. I don’t blame them one little bit. Beyonce won’t apologize for this – racism sells. 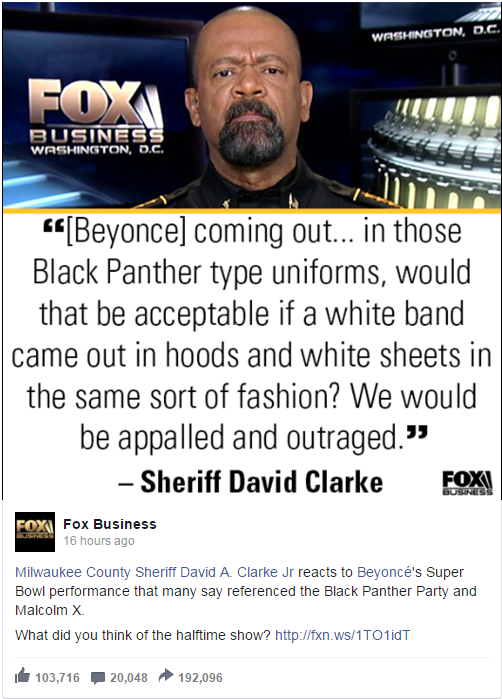 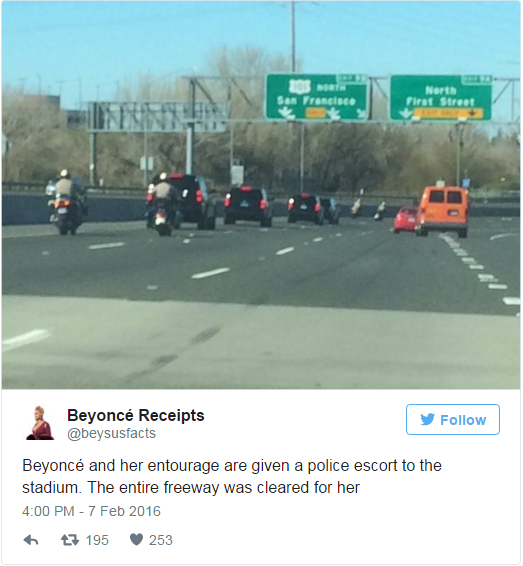