Cry me a river…[1] you beat your best friend to death with a crock pot because she doesn’t trust Barack Obama or the Democrats? Sullivan deserves to be put to death, but because her state does not have the death penalty, she gets 23 years in the hole before possible probation, with a maximum 50 year sentence. Good for that judge – he gave the best sentence he could for such a despicable human being. Then the crazed dirt bag yelled at the judge that her plea deal was a mistake and the judge cooed… ‘it’s a little late for that now.’ Good times and justice well served. 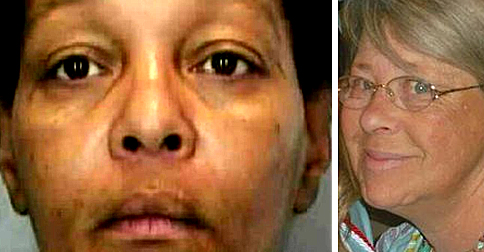 A Black woman who brutally beat her elderly White “friend” to death for criticizing Barack Obama and saying she would vote Republican, was sentenced[2] this week.

A Detroit woman killed a friend with a slow cooker during an argument over presidential politics was sentenced Monday to at least 23 years in prison.

Sullivan, 51, beat Cheryl Livy, 66, with a slow cooker at the victim’s Livonia apartment in October. Sullivan’s defense attorney John McWilliams said his client was “drunk” at the time of the murder.

And why on Earth would she savagely beat someone she called a friend to death with a ceramic cooking pot?

McWilliams said the two were arguing about the 2016 race for president.

Can they be more vague? Which party and who was advocating for whom? The Associated Press and other outlets won’t tell you that, and you can probably guess why.

The victim Livy told Sullivan she “didn’t trust” Barack Obama, and would be “voting Republican” in 2016, whereupon Sullivan became “enraged,” as she put it, grabbed the slow cooker from the victim’s kitchen counter and began beating her with it.

“I beat her in the head and all over her body,” Sullivan admitted back in a February court appearance, where she accepted a 2nd degree murder plea bargain to avoid a 1st degree murder charge.

However, when she learned her sentence yesterday, Sullivan yelled[3] at the judge, “You might as well execute me!” as the Detroit News reported.

Michigan does not have the death penalty.

She’ll be eligible for parole after 23 years and will get mental health care in prison. Her maximum sentence is 50 years.

She said she fears she’s “not going to make it” in prison and suggested the plea deal was a mistake.

“It’s a little late for that now,” the judge said.

Do you think Sullivan got off too easy?

Livy chose her bestie very poorly. But I’m sure she never dreamed she’d be beaten to death by her closest bud for not kneeling at the feet of Obama. I don’t care if Sullivan was drunk or not – she’s a murderous demon and deserves far worse than she got. Picture someone beating another person to death with a crock pot. That’s an epic level of racial rage right there. Sullivan is right though – she might as well have been sentenced to death. She’s not even eligible for parole until she’s 74, which is as it should be. The media tried to cover up the political nature of the crime. But it figures it was a liberal Progressive who got their murderous hate on enough to beat their best friend to death over an election.