Tomorrow, on the 14th anniversary of the bloodiest terrorist attack on US soil[1], #BlackLivesMatter, #fyf911 and their compatriots are calling for a race war… for the wholesale slaughter of all whites and police officers. Law enforcement agencies are on high alert and have issued BOLOs concerning these possibly impending attacks on 9/11. The Daily Caller got a hold of the BOLOs and they are disturbing. Calls for cop killing are coming from a site called blog radio[2]. One memorable quote calls for gangs to lynch any white person they come across. They are calling for the burning of the American flag, Confederate flags, police uniforms and “ALL representations of organized evil and oppressive nations.” Sounds like these racist asshats want to make a day of it.

The Black Lives Matter[4] movement, with its incessant fear mongering and calls to violence, has long been a source of consternation to law enforcement. As the 14th anniversary of 9/11 approaches, many in law enforcement believe that some of the movement’s radical elements have planned further violence to commemorate it.

According to several Be On Look Out alerts sent out by police departments, elements within the Black Lives Matter movement have specifically been calling for attacks on law enforcement officials around the time of 9/11.

The BOLOs, obtained and published by The Daily Caller on Wednesday, painted a disturbing picture of what the Black Lives Matter movement may have planned for the day.

One BOLO announcement read that “#blacklivesmatter and #fyf911 are calling for the murder[5] of more police officers on a site called blog radio.”

#fyf stands for “F*** Yo Flag,” a radical element within the Black Lives Matter community organized by an activist who calls herself “Sunshine.”

On Sunshine’s radio show, a caller allied with the movement said, “When those motherf***ers are by themselves, that’s when when we should start f***ing them up. Like they do us, when a bunch of them n*****s takin’ one of us out, that’s how we should roll up.

“Cause we already roll up in gangs anyway. There should be six or seven black motherf****ers, see that white person, and then lynch their ass. Let’s turn the tables.”

According to The Daily Caller[6], another threat issued by a Black Lives Matter activist on Facebook has also caught the attention of authorities.

“The narrator known as ‘King Noble’ on Facebook states: ‘It’s open season on killing whites and police officers[7]and probably killing cops period. It’s open season. Picking them off. Today we live in a time when the white man will be picked off,” he goes on to claim “the predators are now the prey,’” the BOLO read. 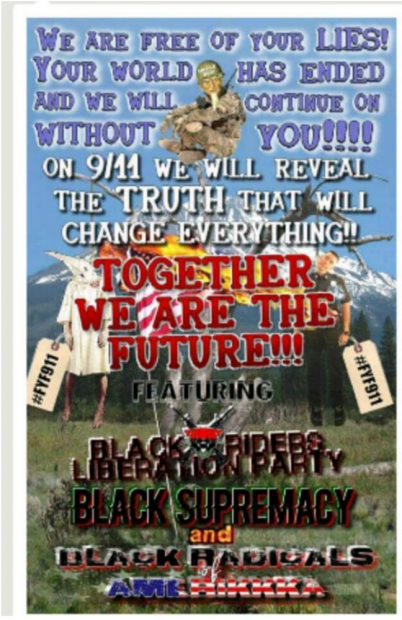 This is also another poster that’s been making the rounds on social media.

Another BOLO stated that a Black Lives Matter website called for the burning of “ALL representations of organized evil and oppressive nations.” This includes, in addition to the American and Confederate flags, police uniforms.

The BOLO concluded that “states should heighten security measures to protect against possible protests and violence. Law enforcement and military personnel should be extremely vigilant and take extra safety precautionson 9/11[9].”

Absolutely sickening. Let’s hope that, whatever they may or may not be planning, law enforcement officials stop them from going through with it.

They go on to state, “We also will be raising the Liberation flag and building on a new nation for the people. This is an INTERNATIONAL movement and a day of unity, progressive action, and liberation. To all OPPRESSIVE AND ORGANIZED EVIL after #FYF911 the people will not be bound to you any longer!” And we are right back with Sunshine… The BOLOs also warn officers about a particular radio show. “A secondary organizer of the movement known as “Sunshine” has also indicated the same acts of violence (lynching and hanging) against white people and cops on her talk show radio, ‘Sunshine’s F***ing Opinion Radio Show.’” Yet another BOLO shows a picture associated with the #FYF911 movement and “depicts a police officer hanging from a tree and Uncle Sam in a military uniform with a branch of the tree up his posterior end.” The BOLO concludes, “states should heighten security measures to protect against possible protests and violence. Law enforcement and military personnel should be extremely vigilant and take extra safety precautions on 9/11.” That’s just great. Now, we not only have to worry about foreign terrorists and lone wolves here at home, we get domestic terrorists galore that want a race war. Great way to honor the fallen – these people are nothing but animals.