Whereas I believe the whole Starbucks red cup outrage is fake[1], this does make a point. At least Dunkin’ Donuts honors the season in the spirit it should be celebrated. They are putting the word ‘Joy’ surrounded by pine boughs on their cups. This is nothing new for them. They do it every year and have for a long time. It’s still a figurative middle finger to Starbucks and rightly so. Starbucks does nothing on their cups that is even remotely connected to the Christian holiday of Christmas. Starbucks tries too hard to be politically correct. In doing so, they offend everyone. I think I would much rather get my coffee and a yummy donut from Dunkin’ Donuts. 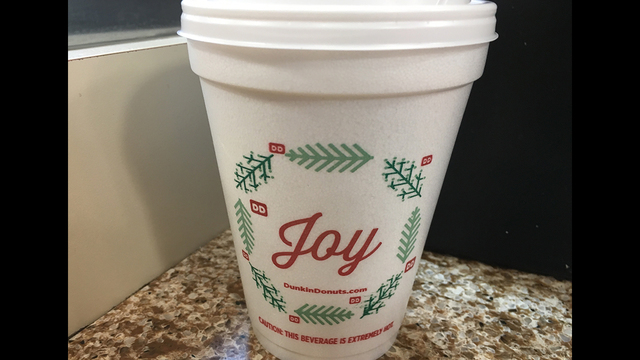 Dunkin’ Donuts has unveiled its holiday cups. In contrast to the red cups at Starbucks, the DD cups go full on winter holiday themed with the word “JOY” in red script surrounded by green pine branches.

Some social commentators are asking if the Dunkin’ Donuts’ cups are a response to Starbucks, but in a statement to Fox 5 the brand said no. “For many years Dunkin’ Donuts has served coffee in festive cups featuring the word ‘joy’ as part of our annual celebration of the season and holiday offerings,” Scott Hudler, a VP for Dunkin’ Brands, said in the statement. “We believe this conveys the happiness and spirit of the holiday season in a way that resonates with our guests.”

What do you think about the cups? 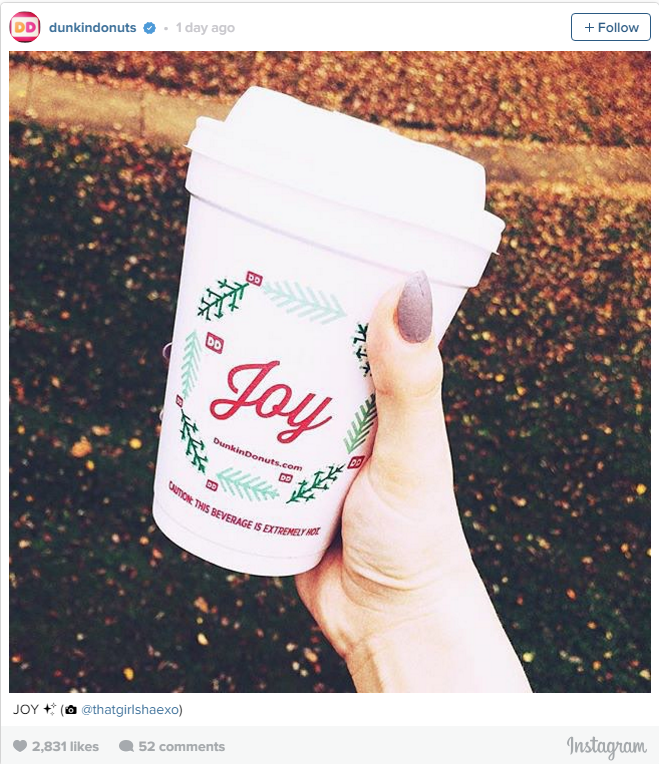 This is a very savvy business move by Dunkin’ Donuts. It works in their favor tremendously. Their lovely seasonal, joyous cups appeal to everyone, not just Christians. The social outrage of Starbucks’ red cups has grown legs and I think it is silly. Christians are not outraged by red cups. We are outraged that Merry Christmas and Christianity as a whole is being purged from society. What is disrespectful is not allowing school children to celebrate the holiday, or stores removing all mention of Christmas. I love the colors of red and green this time of year. I love the birth of the Savior even more. I’m in the majority out there – retailers should take note. Dunkin’ Donuts has.