This monster got off far too easy.[1] He’ll be able to relax in jail for years while his attorneys exhaust his appeals. This demon showed no emotion during the whole trial until the very end. He snickered and cracked jokes with his attorneys. So, at the very end he gives an insincere apology and asks for mercy from his victims and Allah. He was a walking Quran during his statement as well. All I can think of is that eight year-old little boy being blown apart because of this monstrous terrorist. He should have been executed long ago. 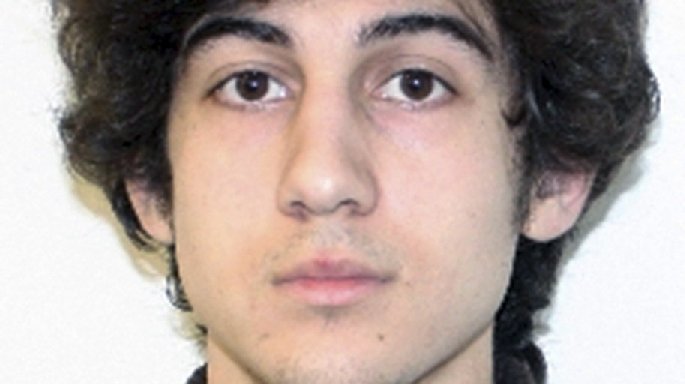 Judge George O’Toole was bound by the jury’s decision rendered last month, which sentenced the 21-year-old defendant to death for his role in the April 2013 bombing, which took the lives of three people and injured over 260, with 18 losing their legs.

Judge O’Toole told[3] Tsarnaev at the sentencing: “No one will remember that your teachers liked you… What will be remembered is that you murdered and maimed.”

After hearing victim impact statements from family members who lost loved ones or who themselves were injured by the attack, Tsarnaev, with a trembling voice, apologized for his actions.

“You told us just how unbearable it was, this thing I put you through,” Tsarnaev said. “Now, I am sorry for the lives that I have taken.”

“I am a Muslim. My religion is Islam. I pray to Allah to show his mercy to the deceased in this bombing,” adding: “I ask Allah for his mercy for me and my brother and my family.”

This was the first time Tsarnaev chose to speak during the entire months-long trial proceeding.

Tsarnaev wrote in a note the night he was captured by police that he and his brother carried out their attack in response to the United States fighting Muslims in the Middle East.

The mother of Krystle Campbell addressed her daughter’s killer. “You went down the wrong road,” Patricia Campbell said[4]. “I know life is hard, but the choices you made were despicable and what you did to my daughter was disgusting.”

The Daily Mail reports[5]: “MIT Officer Sean Collier’s sister, Jen, recounted seeing her parents wailing over her brother’s dead body after the 27-year-old was gunned down by the Tsarnaev brothers in his patrol car on April 18.”

“I don’t know what makes me happy anymore,” she said. “There is an emptiness that I cannot manage to fill.”

“The defendant he has taken Sean away from me, but he’s also taken me away from me,” she added, saying she struggles to explain her life to new people she meets.

Bill Richard, father of Martin, said that Tsarnaev could have stopped his older brother, who masterminded the attack, at any point.

“He chose to do nothing, to prevent all of this from happening,” Richard said of Tsarnaev. “He chose hate. He chose destruction. He chose death. We choose love. We choose kindness. We choose peace. This is our response to hate. That’s what makes us different from him.”

Rebekah Gregory, who lost a leg due to the bombing, mocked Tsarnaev for fiddling with his pencil and cracking jokes with his lawyers in courtroom.

“You made us stronger,” she said[6]. “We are Boston strong and America strong, and choosing to mess with us was a bad idea. How was that for your victim impact statement?”

The convicted killer will be transported to the federal prison in Terre Haute, Indiana. He is expected to appeal the ruling, which will likely take years to complete.

Only three people[7] have been executed under the federal death penalty since it was reinstated in 1988, including Oklahoma City bomber Timothy McVeigh.

Three days after the bombing, he also executed a police officer in cold blood. This whack job ran over his own dying brother to get away and now he pleads for forgiveness and mercy. Sorry, fresh out. Death can’t come soon enough for this asshat. Let him explain it to Allah on the other side. He reveled in murdering and injuring many, many people. The Boston Marathon Bomber forever changed the lives of hundreds of Americans. But his actions did not give him pause. He went out and partied and got high after he did it. He’s not sorry at all – the only thing he regrets is he didn’t kill more infidels and that he didn’t get away with it. What a hateful waste of humanity.