Boy, 13, saves his little sister from a would-be kidnapper

A little four year-old girl owes her life to her loving, big brother. He had his wits about him and the courage to ring out the alarm when a 61 year-old dirt bag, pervert grabbed his little sister and tried to kidnap her. He yelled for someone to call 911 and this time, help came. The scummy kidnapper, having an IQ the size of a medium turnip, stuck around to thoughtfully assist the police in capturing him. Hopefully, he will be thrown into deepest, darkest prison where he will be the recipient of those who have a special fondness for perverts. Big brother saves the day and his sister – he’s a real life hero.[1] 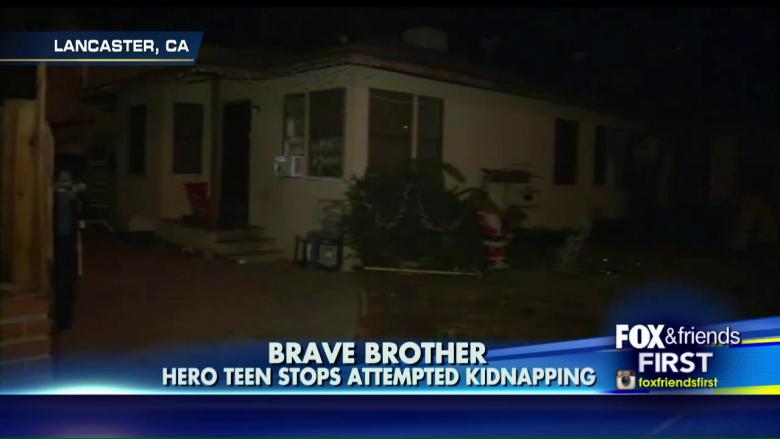 Authorities in Southern California are calling a teen boy a hero for springing to action and preventing a would-be kidnapper from taking off with his little sister.

According to the Lancaster Sheriff’s office, a 4-year-old girl was playing in the fenced-in front yard of her family’s home on Saturday morning when a would-be kidnapper entered the yard and asked the little girl her name. That’s when, authorities say, the suspect reached down, grabbed the child and started to walk away with her. But police say the girl’s quick-thinking 13-year-old brother grabbed his sister’s arm and shouted for someone to call 911.

Lancaster Deputies patrolling the neighborhood were flagged down by citizens who directed deputies to the suspect who was still in the area, according to authorities.

Earl Williams, 61, of Los Angeles was arrested on attempted kidnapping charges and is being held at the Lancaster Sheriff’s Station on $100,000 bail. He does not have representation as of yet and is set to be arraigned on Tuesday.

Authorities say the 4-year-old victim was not injured.

According to Deputy Amber Leist from the Lancaster Sheriff’s Station, deputies have since delivered Christmas gifts and food to the little girl and her family.

“It’s a single mom raising several kids and we just thought, let’s bring them a little holiday cheer after all they went through and let them know there are people out there who do care about them,” Deputy Leist said.

It seems America and the world are infested with evil individuals these days. This one was caught… so many aren’t. One commenter related that in Alberta, Canada, they are dealing with the brutal kidnapping and rape of a six year-old girl on an Indian reservation. She was left beaten, naked and dumped by the monster who did all this to her. He obviously thought she was dead. She is on life support in Edmonton and the monster has been arrested. We can all be thankful that a quick thinking brother wouldn’t let go of his baby sister and called for help in California. He kept his sister safe from something happening to her like it did to the little one in Canada. There is one less evil predator on the prowl because of him. I also thought the police doing such a nice thing for the family after this trauma was touching.