BREAKING: State Police Demand That Residents Turn in Their Guns

Actually, the police slanted it as ‘encouraging’ residents[1] to sign a nonviolence pledge and turn in their guns. I’m sure they would demand guns be surrendered in North Carolina if they could get away with it. Police and officials seem to have a real problem with the Second Amendment in that state. They blame crime on the guns and not the perpetrators of the crime. Even if you took away all legally owned guns, criminals would still have them. They would still get them on the black market and people would be left defenseless. They would be sheep to the literal slaughter. As far as pledging nonviolence… right. Like that means anything at all to a criminal. Get real. 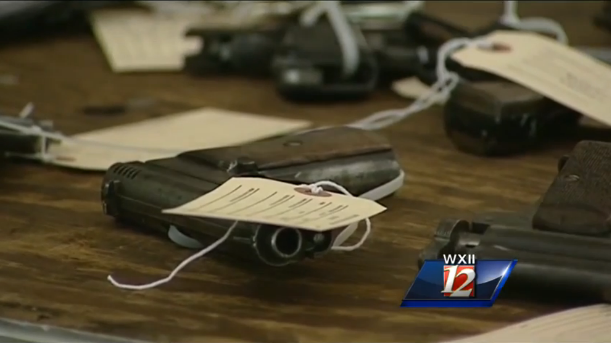 According to the Greensboro News & Record[3], the Greensboro Police Department collected all guns that have been cleaned and unloaded from anyone at least 18-years-old during the weekend event. The police department also accepted guns anonymously.

Residents were encouraged to sign the “Pledge of Nonviolence” and relinquish any unwanted handguns, rifles, shotguns and ammunition to the police Saturday at the Destiny Christian Center. Guns will be checked to see if they had been lost or stolen; if so, those guns will be returned to their rightful owner, the News & Record reported.

“Violence is on the rise somewhat in our community,” Deputy Police Chief James Hinson told WXII-TV[4]. “A lot of that violence is centered around handguns and aggravated assaults. And the ultimate goal is to reduce violence in our community so that our citizens can feel safe when they go out and just continue to improve the overall image of our city.”

WGHP-TV reported[5] that the first 1,000 Greensboro residents to sign the pledge would receive a small gift. However, there is no compensation — including monetary — for turning in firearms.

Greensboro citizens who could not attend Saturday’s event can still turn over their weapons to the police department at anytime by calling the department’s non-emergency phone number, according to the News & Record.

They let thugs get off free and clear as long as they turn in their guns. How noble and stupid. They give away token gifts for those brain dead enough to willingly turn over their firearms and give up their constitutional rights. This won’t do squat against the rising violence there. Strong leadership, jobs and a police department who follows the law would go much further to handling crime in North Carolina. Try arming everyone in the state and you would see crime drop like a rock. You could also start by voting out Marxists in your state and voting for a real conservative like Ted Cruz for president. I guarantee you that people going out unarmed is not going to make them feel safer. Just ask the French. This is embarrassingly moronic. Shame on the state police for doing this and double shame on citizens for being dumb enough to fall for it.