Oh man… this is priceless. How freaking high do you have to be to imagine someone is chasing you, run onto a closed college campus and hide in a closet that isn’t locked… then do drugs and defecate there for two days before you finally realize you have a phone and call the cops? The cops come and smell meth, but you’ve done all the drugs you have. The cops set you free and then arrest you – epic fail.[1] 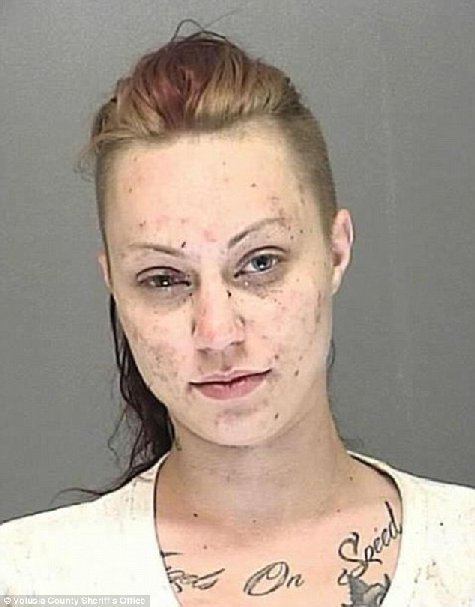 A Florida couple who were high on drugs spent two days believing they were trapped in a janitors closet and eventually called 911 for help, only to be told by police they could have just opened the door themselves.

The strange incident occurred at the Marine and Environmental Science Center at Daytona State College on Tuesday.

Inside the closet, police said they found feces and copper scouring pads used to smoke meth and crack cocaine, according to The Orlando Sentinel[3].

Police said they smelled meth in the closet.

Campbell and Arwood claim to have been chased into the closet on Sunday.

It is not known what they were doing at the facility.

The campus was closed for the holidays.

It is also not clear why the pair waited until Tuesday to seek help.

However Arwood called 911 and told police they were trapped.

Police used his cell phone to trace the location and arrived to let the two out.

But an officer, trying to understand what had happened, went into the closet and shut the door.

The door did not lock.

Arwood and Campbell were charged with trespassing.

No drugs were found.

Campbell was also charged with violating her probation, stemming from a 2013 arrest.

Arwood has a colorful criminal history.

He has been to jail five times, with his first stint in 2000.

His offenses range from armed burglary, possession of more than 20 grams of marijuana and fleeing law enforcement.

These two were stoned even when they were let out. They stumbled around dazed not seeming to realize exactly where they were. The officer tried to figure out what happened, but could not lock the closet door. Ladies and gents, we got a winner here! Wow… they couldn’t even figure out how to turn a door knob. That’s some kind of dedication to addiction there and ranks at the very top for stupid criminality. These two deserve a Darwin Award – they take the cake and then smoke it.