Joanne Chesimard (aka Assata Shakur) is wanted for escaping from prison in Clinton, New Jersey[1], while serving a life sentence for murder. On May 2, 1973, Chesimard, who was part of a revolutionary activist organization known as the Black Liberation Army, and two accomplices were stopped for a motor vehicle violation on the New Jersey Turnpike by two troopers with the New Jersey State Police. At the time, Chesimard was wanted for her involvement in several felonies, including bank robbery. Chesimard and her accomplices opened fire on the troopers, seemingly without provocation. One trooper was wounded and the other was shot and killed execution-style at point-blank range. Chesimard fled the scene, but was subsequently apprehended. One of her accomplices was killed in the shoot-out and the other was also apprehended and remains in jail. In 1977, Chesimard was found guilty of first degree murder, assault and battery of a police officer, assault with a dangerous weapon, assault with intent to kill, illegal possession of a weapon and armed robbery. She was sentenced to life in prison. On November 2, 1979, Chesimard escaped from prison and lived underground before escaping to Cuba in 1984. She is thought to currently still be living in Cuba. Shame, shame on Marquette University for celebrating a cop killer and a terrorist[2]. 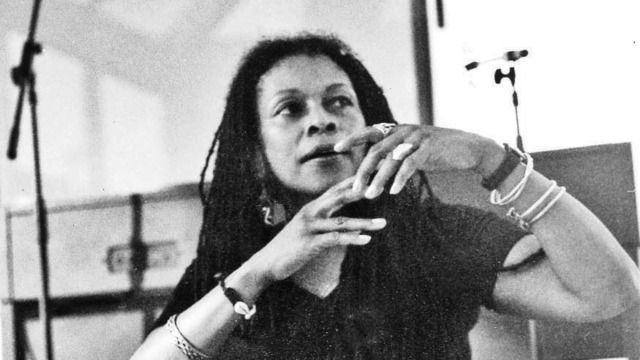 The school is once again in the spotlight for the wrong reasons thanks to a mural erected at the Gender and Sexuality Resource Center on its Milwaukee, Wis., campus honoring convicted cop killer, escaped convict and wanted terrorist Assata Shakur.

The mural features a likeness of Shakur along with two quotes.

She escaped six years after her conviction and fled to Cuba.

The audacity of a university devoting wall space to a woman who murdered a cop and who made it onto the FBI’s Most Wanted Terrorist List in 2013 may seem strange until you realize the recent history of Marquette.

As BPR wrote in December[3], this is the same university that banned a professor, John McAdams, from campus because he wrote a blog post defending a student’s right to oppose gay marriage in class after that student’s teacher, Cheryl Abbate, told him, in no uncertain terms, to support same-sex marriage or drop her class.

And this is supposed to be a Catholic university, remember.

The reaction in the Twitterverse to the school’s latest controversy was fierce.

@MarquetteU[4] as a graduate of a Jesuit university I’m embarrassed by Marquette celebrating a cop killer.. @TwitchyTeam[5]

It is outrageous for a renowned Catholic university such as Marquette to promote and revere such a vile murderous. This is the same campus that banned a professor for defending a student’s right to oppose gay marriage. Just what definition of Christianity are these people following? Leftists hiding behind religion who love cop killers. No way would I let my children attend that university. This is just plain evil and loathsome.