Boy, talk about hypocrisy on display.[1] Did you know, that since 2012, there have been over 6,000 gun-related crimes in Chicago? There have been over 1,200 gun related murders as well. This in a city with the strictest gun laws in the nation. There’s not a single gun shop within the city limits. There is no freaking way I would ever live in a kill zone like Chicago. Obama had an interview over Arne Duncan stepping down as Secretary of Education. In that interview, while taking questions, he actually addressed crime there. He didn’t take responsibility for it or point out that most of the crime is gun-related, even though ‘guns’ aren’t allowed… oh no, that would hurt his ‘politicization’ of guns, now wouldn’t it? Chicago just went through its deadliest month of violence in 13 years and Obama just can’t seem to connect that fact with his gun-hating, progressive policies. 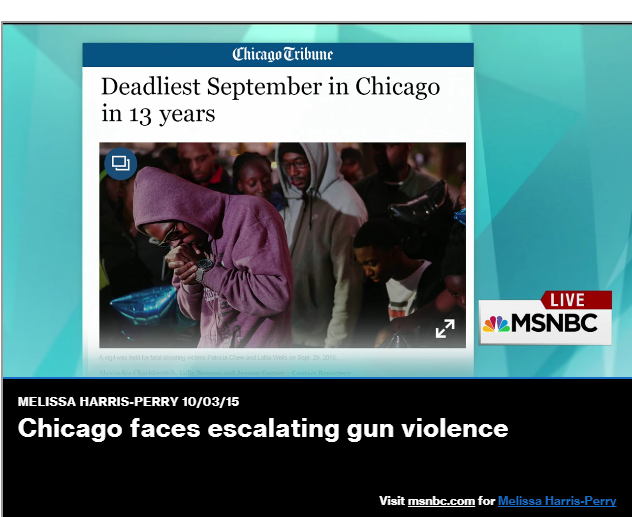 You know how bad it’s gotten when uber-progressive MSNBC is finally calling attention to the deadly escalation of violence in President Obama’s hometown of Chicago. We’ve reported on that frequently here — and the president’s disgraceful silence on this epidemic of largely black-on-black crime in his hometown. Of course, we all know the reason for his silence on what’s happening in Chicago: it doesn’t fit his narrative of white-on-black violence, which he’s so quick to decry, even when it involves police officers defending themselves in the line of duty.

Now, as Chicago just endured its deadliest month in 13 years, even the national lamestream media is starting to take notice. More shockingly, President Obama himself even mentioned Chicago in this video below — when taking questions after announcing the resignation of Secretary of Education Arne Duncan.

“Arne’s going back to Chicago… let’s not forget this is happening every single day in forgotten neighborhoods around the country… Kids are just running for their lives trying to get to school.” [Actually, Mr. President, we’d thought YOU’D forgotten about the neighborhoods in your hometown of Chicago.]

So though we might not have known it until now, clearly President Obama is aware of the escalating violence in Chicago. But compare his statement on this to his full-court-press outrage discussing the Oregon shooting that killed nine (plus the shooter), in not just one but two press conferences, plus White House-released photos. Meanwhile, Chicago’s murders, taking place every day at even greater orders of magnitude, garnered only a loose, cursory mention.

It all makes perfect sense, however, when you consider what’s happening in Chicago not only doesn’t fit the president’s narrative of white-on-black crime; even worse, it blatantly contradicts his gun control agenda.

Indeed, this horrific violence is escalating despite some of the most stringent gun laws in the nation, as The Free Thought Project[3] explains:

Inside the city limits of Chicago, not a single gun shop can be found — they’ve been outlawed. With is nearly 3 million residents, Chicago has the most stringent gun laws in the nation.

Gun laws were so strict, in fact, that in 2010, the US Supreme Court interveined saying the law was going to far. However, city lawmakers were able to “keep the ban” without “legally keeping the ban.”

The ban on assault rifles, a high-capacity magazine ban, and nowhere to purchase ammo makes Chicago one of the toughest places in the country to obtain a serviceable and firing weapon, legally.

Yep, kinda hard to push gun control as the answer when talking about what’s going on in Chicago. Sadly, the answer to what’s happening there is likely a lot more complex than fits into a neat liberal narrative — and, moreover, may require addressing some unflattering truths about liberalism’s role in it.

The progressive counterweight to “never let a good crisis go to waste” is “never let facts get in the way of your agenda” — so I won’t hold my breath waiting to hear more from President Obama on addressing the violence in Chicago.

Chicago is a cesspool that has been created by Marxists and touted as some kind of utopia. Yeah, a liberal, utopian hellhole. Obama has been more than aware of the violence all along. It’s just that he doesn’t care. He cares about a political agenda. He wants to turn all of America into one giant Chicago. No thanks. And I’m still waiting to hear him address the hate crime in Oregon for being just that… after all, nine Christians were summarily executed. You would think that would rank at least one of his shout outs. Nope. But those evil, black guns… you know, the ones we protect ourselves with… well, ban em all! Except of course his and other select individuals. It’s gotten so bad in Chicago, some say the National Guard should be patrolling the city. The police just aren’t enough anymore in that war zone. If that ever happens, the door to martial law will truly be open. I suggest getting the hell out of that place if you can.