There are cages[1], then there are cages. I find this story very sad and heartening at the same time. I’ve always hated circuses – I can’t stand to see animals live that way. In my opinion, it is beyond cruel. I pretty much feel the same about zoos – most anyway. Some have grassy areas and nice places for the animals to live… many do not. The one I went to here locally, had the bears living on a rocky piece of dirt and they were filthy. It was deplorable. I’m from the West (going back there as soon as I can) and I am used to seeing animals roam free, the way they should be. Will, the lion, after 13 years in a circus cage, was finally upgraded to a grassy pen in a reserve, where he walked on grass for the first time. His overwhelming joy is obvious and brings tears to your eyes. 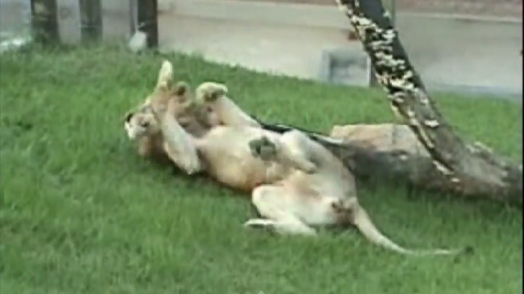 After years of living confined to a metal cage, a circus lion named Will finally got to feel the earth for the first time in his life.

AOL[2] reports, the Rancho dos Gnomos Santuário rescued Will after being forced to perform with a traveling circus for 13 years, never once knowing what it was like to walk on grass.

Mark Pompeo, the founder of the sanctuary in Brazil, told The Dodo[3] that Will was a very happy lion during his years of freedom.

“Here he had the opportunity to interact with other lions. He loved to lie in grass and look at the sky.”

Will did pass away of old age [in] 2011, but not before he had five years of grass-filled bliss.

Will only had five years of semi-freedom where he could roll in the grass and play with other lions. But they were a wonderful five years. Will looked more like a giant house cat, playing in the grass and sharpening his non-existent claws on wood. To pen up any animal, even a dog or house cat is just mean. They need to roam and play… to explore and be free. It’s a wonderful thing that Will was rescued and got to live the rest of his life where he could roam and play (albeit limited). The video is absolutely touching and I dare you not to cry. That was one happy kitty.