If you are willing to pick a fight[1], be willing to have your clock cleaned. This bully found that out the hard way. I don’t know where this school is and as far as I can tell the video is from 2014. What I do know is a bully was posturing and pushing another student around in a language I don’t recognize. The two young bulls kept shoving each other and having a stand off until the intended victim decided he’d had enough. He punched the bully who went down… hard. The guy got back up and started again and the kid hit him once more. This time, the thug stayed down. 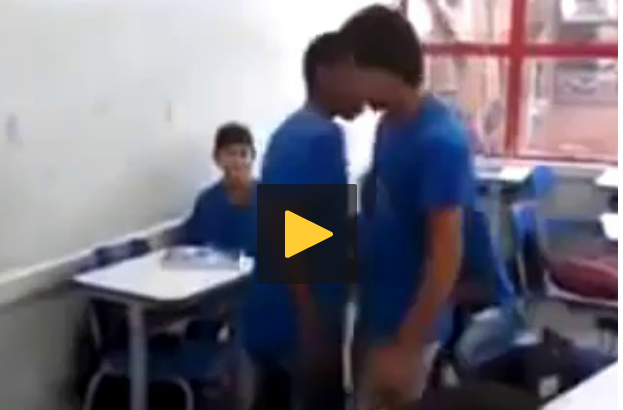 Bullies have a way of targeting those[3] they believe would make good victims — namely those who might be smaller or seemingly weaker than they are. Because they rarely pick on someone their own size, it’s nice to see bullies get the justice they deserve[4].

In a undated video uploaded to DailyMotion[5], a bully got exactly what he deserved after picking on someone he thought would be easy prey, according to comments accompanying the video.

There is no way to know exactly what happened prior to video, of course, but DailyMotion described what appeared to be a typical bullying scenario, and we certainly have no reason to disbelieve that description.

The student who took down the bully was smaller than him, but much quicker with a wicked punch. I have no way of knowing what brought this on, but it looks like justice well served here. Bullying is something all of us have experienced at one time or another. Sometimes it is life and death and is wickedly serious. It is a small step from shoving someone to killing them. I’m glad to see one taken down. I hope he learned his lesson, but I doubt it. His kind rarely do.