What a class act.[1] And this is the un-funny, racist scum that NBC wants to host Celebrity Apprentice. Without Donald Trump on there, they’ll have maybe an audience of two. And that may be optimistic. All you need to know about Lopez is right here in this profane, racist, derogatory chant against Donald Trump who spoke the truth. He didn’t disparage all Mexican immigrants – just the ones who come here illegally. If I were part of the Hispanic community, I’d take a close look at Lopez’s sexual preferences. When someone starts slinging slurs, they either swing that way or they are just a straight up hater. I also suspect that Lopez’s lashing out at Trump is self-serving. He wants Trump’s spot on Celebrity Apprentice. Let him have it – it’s toast anyway. 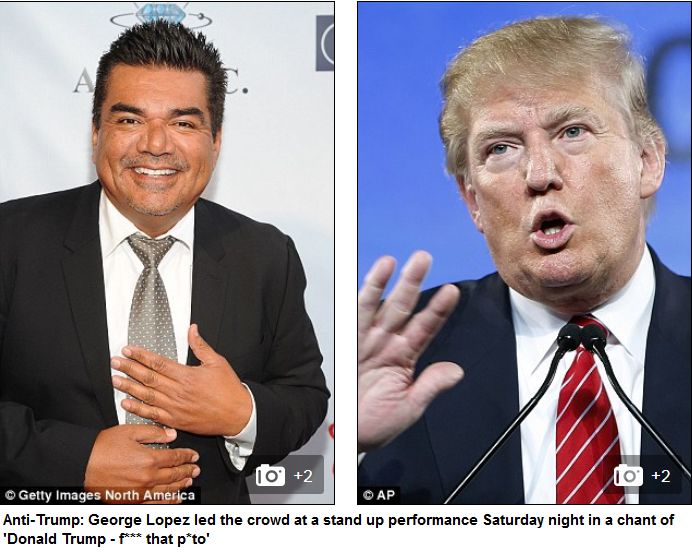 At a stand-up performance in Arizona Saturday night, comedian George Lopez led the crowd in an impassioned chant against Donald Trump for his comments disparaging Mexican immigrants.

‘This country is better for Latinos in it,’ Lopez shouted to the crowd, who responded by chanting ‘Donald Trump – f*** that p*to’.

P*to is the Spanish word for male prostitute, and it is considered to be a homophobic slur by some.

However, Lopez has received little flack for the public condemnation of Trump.

He has been regularly lashing out against the real estate mogul, ever since Trump called Mexican immigrants criminals and ‘rapists’ during a speech announcing his candidacy for president.

Lopez’s criticism of Trump may just pay off for his career as well, as he is rumored to be on the short list of contenders to replace Trump as host of the Celebrity Apprentice.

NBC, the network that owns the rights to the reality show, cut all ties with Trump last month following the Mexican immigrant comments.

NBA legend Magic Johnson is also considered to be a top contender for the position. Sources close to the network told TMZ that they are looking for a successful minority businessman active in the inner cities to fill the position, qualities multi-millionaire Johnson possesses.

And Lopez isn’t the only one calling out Trump. Fellow Latino celebrities like Ricky Martin, Eva Longoria, America Ferrera and the rapper Pitbull have issued statements against Trump.

NBC courts racist minorities and transgenders these days. They love anything and everything that is wicked and perverse. They want to rub America’s face in it. All this crap doesn’t bother Donald Trump one bit – any press is good press in his world and he’ll spin it to his advantage. Lopez could have been a true leader for the Hispanic community… encouraging young Latinos to come here legally and make a success of themselves. Instead, he’s pushing hate and criminal behavior. He panders to gang bangers and revolutionaries. If Lopez hates it here so much, he should move to Mexico. I doubt that Lopez even knows exactly what Trump said. Trump has been wildly misquoted – but Lopez doesn’t care. He’s all for a racial and political Marxist agenda. That’s entertainment.