Good. Inciting violence online and threatening to kill police and those that support officers deserves nothing less. He tried to drive a movement across the US as well for killing cops. For Valentine’s terroristic threats, he faces up to seven years in the klink. Good thing I’m not a judge because he wouldn’t get off light. He’s in such a hurry to kill or be killed… typical Marxist thug. He’s not just a protester… he’s a stalker and now a terrorist. He also threatened to blow up a jail and kill a supporter of Darren Wilson. In an ironic twist, Valentine’s charges will be heard by a Grand Jury. The further irony is he will get fairly judged just as Officer Wilson did – whether he deserves it or not. Funny how our legal system works – it’s called actual ‘justice.’[1] 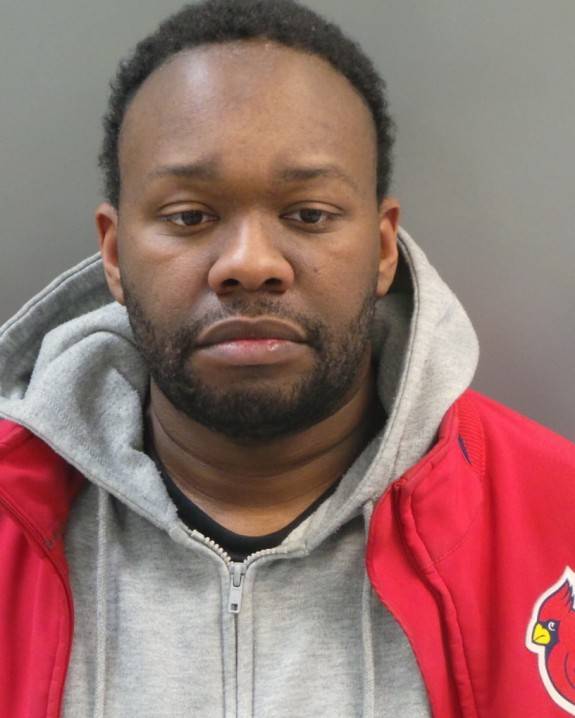 In late December, as reported at The Gateway Pundit[3], a Ferguson protester is threatening to murder police on New Year’s Eve.

St. Louis arrested the protester this week and charged him with ten counts of making a terroristic threat.

Jason Valentine faces up to 7 years in jail for making the threats against the police.

A man in St Louis has been charged with threatening to kill police and cause an explosion at the city jail in Twitter posts that referenced Ferguson, the nearby town where an officer’s fatal shooting of an unarmed black 18-year-old led to protests and rioting.

Jason Valentine is accused of 10 counts of making a terrorist threat, a felony punishable by up to seven years in prison in Missouri. The charges relate to 10 tweets that Valentine, 35, is alleged to have posted in December with the intention of “frightening 10 or more people”.

Several referred to New Year’s Eve as “kill a pig night”, according to a probable cause statement released on Thursday by the St Louis circuit attorney, which claimed Valentine “used the slang ‘pig’ … to describe police officers” and was threatening to kill them.

One tweet allegedly said: “St Louis City Justice Center Mysteriously Exploded 12/31/2014”. Prosecutors charge that was a threat to cause an explosion at the building. Their statement said police “considered these threats to be serious in nature” and claimed that “kill a pig night” had “gained momentum nationally”.

Another tweet allegedly used the hashtag “#KillJeffRoorda”. Roorda, the business manager of the St Louis Police Officers Association, is a prominent supporter of Darren Wilson, the Ferguson police officer who shot dead Michael Brown after an altercation on 9 August.

According to the probable cause statement, Valentine “admits to using the Twitter user handle @jdstl314 and being the sole poster under that user handle”. The account has since been suspended and cannot be viewed. Police said Twitter suspended it on 29 December.

Valentine was listed as living at an address in the Shaw neighbourhood. According to the probable cause statement he has a previous conviction for aggravated stalking and violation of a protection order. The charges are due to be presented to a grand jury for consideration.

This mental giant is more fodder to further violent communist outbreaks and protests. If you make obvious threats to kill officers and people in general, you should be made to pay for your threats. He admits to the tweets and should answer for incitement. There are more and more radicals coming together stirring up racial divide and animosity out there. This guy was just dumb enough to put it on Twitter and get caught. I’m just glad it did not happen. Any moment now Al Sharpton, Holder, Obama and the DOJ will come to this loser’s defense or an expensive attorney will magically appear, screaming about civil rights violations and playing Selma for the jury. Hopefully, he’ll be seen for the violent thug he is and get thrown in a dark hole somewhere, so he can’t actively work to hurt people and destroy the country using race as a convenient excuse. 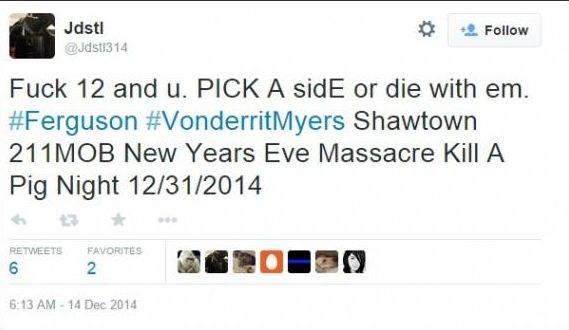 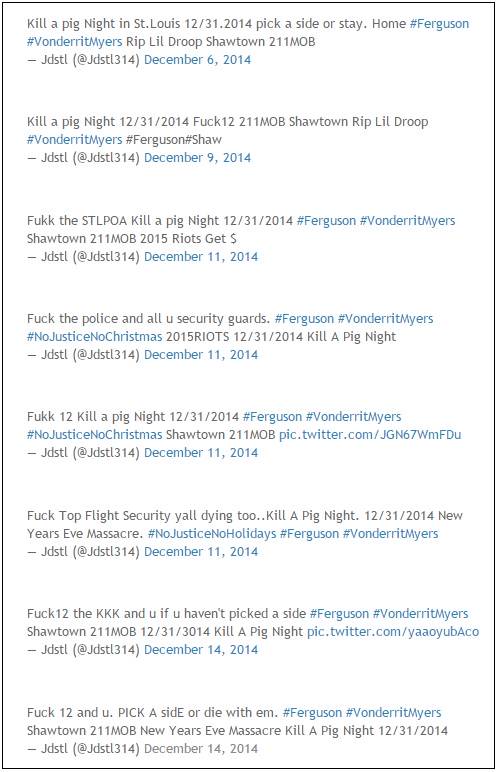