What a wonderful story![1] This officer was in the middle of a parade and drove by a young, autistic boy who had basically shut down, so the officer stopped right there to make him a balloon animal. Points for caring and for being one of the best police officers ever – unfortunately his balloon animal skills leave something to be desired. Heh. But hey… the kids loved him and he made that little boy’s day. His autistic meltdown that was in progress stopped and reversed. Evidently the officer stayed and did a second animal that turned out much better than the first. I think he made friends for life and he certainly showed he is a hero in more ways than one. 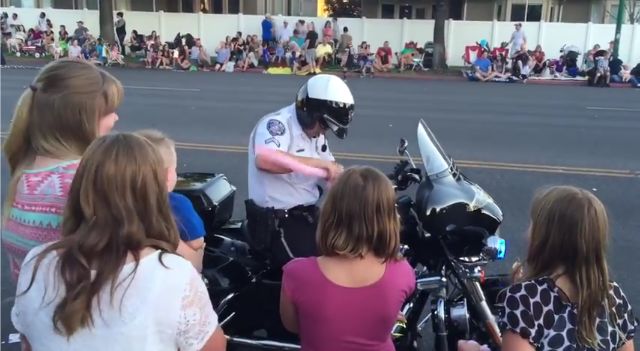 A police officer in Orem, Utah, made a boy with autism’s day when he stopped in the middle of a parade to create a balloon animal for the boy.

Initially, the officer went in to give the boy a high-five, but after noticing the boy was not prepared for it, he took out the balloons.

In the YouTube description: “The cop initially was going in for a high-five as he was driving by, but he saw that the little boy shut himself down emotionally so he stopped, turned off his bike, and started making him a balloon animal.”

The Orem Police Department later posted the story on their Facebook page: 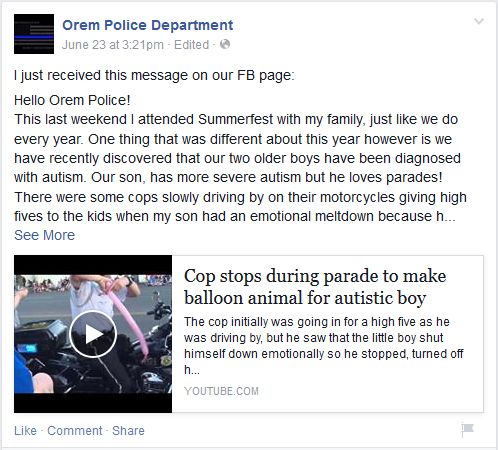 People are quick to say awful things about the police, but very slow to praise them for putting their lives on the line for all of us at a moment’s notice. Or for kind acts like this one. There are many, many courageous and kindhearted cops out there. I have seen instance after instance of officers doing for others with no expectation of a thank you or recognition. I grew up admiring police officers… there are rotten apples that are cops just as there are in all walks of life. But by and large the officers I have known are great people and would do all they can to save another. Moments like this one mean the world to a child with Autism and their family. That’s one heck of a cop – balloon animals and all!