Death to Cops Chant by #BlackLivesMatter After Goforth was Assassinated [VIDEO]

Tell me how, “Pigs in a blanket, fry ’em like bacon!”[1] isn’t hate speech? At the Minnesota State Fair, #BlackLivesMatter marched arm in arm chanting that phrase. It is violent cop-hating rhetoric. They were screaming this just hours after Deputy Darren Goforth in Texas was gunned down while getting gas for his patrol car. A black guy walked up behind him and shot him multiple times, killing him instantly. Then he stood over the officer and shot him several more times execution style. WCCO-TV reported that the march and anti-cop rhetoric upset police officers who were providing escort and security for the marchers. A spokesman for the officers called the action of the BLM protesters “disgusting,” saying it created a dangerous atmosphere for law enforcement personnel. These people want a race war and dead cops. 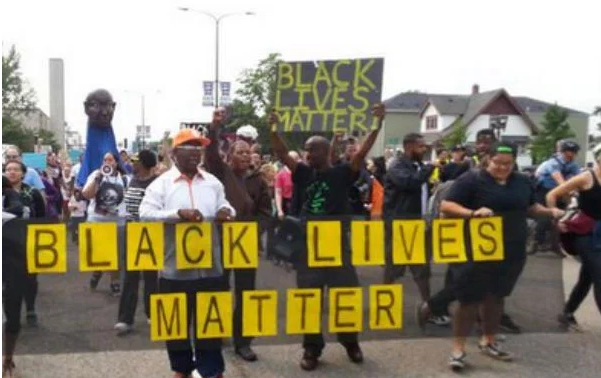 On August 28 at approximately 8:30 pm, Deputy Darren Goforth, a 47-year old white man and 10 year veteran with the Harris County Sheriff’s Office, was assassinated[3] in an unprovoked attack as he was fueling his patrol car at a Chevron station in Northwest Houston. He was on duty and dressed in uniform. The suspect in his murder, Shannon J. Miles, is a 30-year old black man with a criminal history.

At this point, authorities have no motive for Goforth’s execution-style murder other than the fact that he was a police officer. What appears to be a targeted assassination of police officer has Miles facing capital murder charges. It also makes the chants loudly said by #BlackLivesMatter anarchist protesters at the Minnesota State Fair on Saturday all the more disturbing.

As these anarchists were marching, they were chanting, “Pigs in a blanket. Fry ’em like bacon.” This was hours after Deputy Goforth was assassinated in an act of barbarism. The man charged with his murder, Miles, is suspected of approaching Goforth from behind as he was fueling his patrol car and shooting him. After Goforth fell to the ground, the suspect stood over him and continued firing rounds into his body.

This isn’t the first time #BlackLivesMatter anarchists have called for the death of police officers. On December 13, 2014, the group marched through the streets of New York loudly chanting “What do we want? Dead cops! When do we want it? Now!”

One week later, NYPD Officers Wenjian Lu and Rafael Ramos were killed while sitting in their patrol car. Police determined that they were targeted for assassination[4] by Ismaaiyl Brimsley, a black man, simply because they were police officers.

On August 12, just over two weeks before the assassination of Deputy Goforth by the suspect Miles, the New Black Panthers staged a protest outside the Waller County Jail where Sandra Bland died. Though it has been determined that she took her own life, the radical black group blames the police. Heavily armed, they chanted, “Oink. Oink. Bang. Bang.”

Breitbart Texas reports[5] on a another chant by the group in a “back and forth marching cadence style song.”

Just over two weeks later, Harris County Sheriff’s Deputy Darren Goforth, who was white, was assassinated while in full uniform and fueling his patrol car.

To date, Barack Obama has not commented on the targeted assassination of Deputy Goforth.

Harris County District Attorney Devon Anderson said that eyewitnesses that have identified Miles as the shooter, saying he ran up behind the deputy and shot him in the head. Police also recovered a weapon from Miles’s home. A ballistics test matches it with the gun used to kill Goforth.

A gofund me[6] account has been set up to help the family of Deputy Goforth, who leaves behind a wife and two children, ages five and 12.

I agree with Kevin Jackson over at Breitbart News[7], #BlackLivesMatter should be designated as a hate group. Just how much longer do we let this go on before we put a stop to this violence and the attendant rhetoric and incitement that goes with it? How many more cops and innocent people have to die before we’ve had enough? Barack Obama is silent when white people or officers are gunned down in cold blood. He saves his outrage for black lives, whether they are criminals or not. This war is just getting started and there will be much more violence under the presidency of Barack Obama. All lives matter… blue lives matter… lives matter. Just not to Marxists and racists.