The police are right[1] to charge the guy, he should not have been driving in the first place. I do not know why the DMV would give him a license, saying that he knew of his condition and he should decide when he should drive. If he is prone to frequent seizures, he should not be behind the wheel of a vehicle period. He ran over four police officers and seriously wounded the one he drug for about 25 yards. This all happened last December. The officer didn’t get out of the hospital until February. At first the police recognized the accident was due to a medical condition, but when they found out that the guy knew he had this problem and drove anyway, that was a whole new ball game. 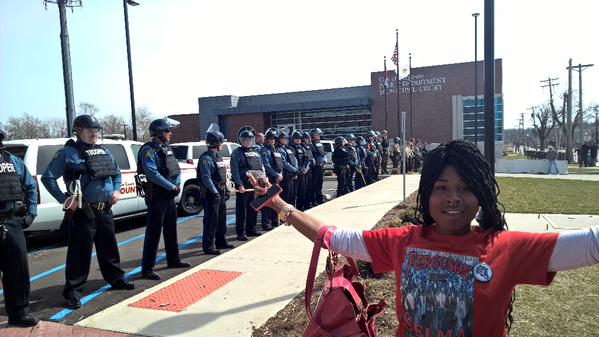 Christopher Antwan Booker, 41, hit and ran over[2] four Denver police officers with his car while they were monitoring a Mike Brown student protest at East High School.

One police officer was hit and dragged underneath Booker’s car for 25 yards.

The students laughed and cheered[3] when the officers were hit.

They were marching during school hours from East high school to the state capital.

Christopher Antwan Booker said he was suffering a seizure when he hit the officers with his car.

On Wednesday, police arrested Christopher Booker for mowing over four police officers in his car at a Mike Brown high school protest.

Felony charges now face the driver who hit and seriously injured a Denver Police Department bicycle officer who had been escorting a protest of high school students during December.

Police identified the driver a few days after the collision as Christopher Booker, 42. He was not arrested at the time, and Chief Robert White said preliminary indications were that the crash was due to a medical condition.

Now, a probable cause affidavit reveals that the officer who pulled Booker from his damaged car recognized the signs of a seizure. Afterward, Booker also told the investigators that he takes medication for seizures and had suffered another one less than a month earlier.

Police checked with Booker’s doctors and confirmed he has had the condition for several years, but had never disclosed the condition on his applications for a driver license from the Colorado Department of Motor Vehicles.

“The doctors indicated that they felt that Mr. Booker was… aware of the risk that he presented if he chose to drive a car with his condition,” the affidavit states.

Booker is now facing[5] a whole slew of charges. He’s very lucky that officer didn’t die. Let me ask you this, what if it wasn’t a seizure that caused the accident? What if that was a handy cover for running over some cops? Either way, Booker is at fault. He should also have his license revoked. As far as I’m concerned, those students shouldn’t have been out there protesting during a school day in the first place and they should not have had a police escort. The irony of all this is stunning. Regardless, I’m glad this guy will be paying a price for assaulting those officers. Their job is dangerous enough as it is without becoming moving targets.