Don’t Hurt the Loser’s Feelings: Kids Told Not to Win Games By Too Much 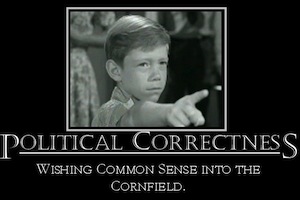 A kiddie soccer league in Ottawa is oh, so concerned about the feelings of its little players. These poor kiddies will just wilt and turn to mush if they lose by too much according to league officials. So, in order to protect the delicate feelings of Canada’s youngsters, league officials have implemented a rule that forces an automatic loss for any team beating another team by more than 5 goals.

Yes, you heard me right. A winning team will automatically lose if they are winning by more than 5 goals.

Now, I’d like to puff my chest and laugh at this Cannuckle-headed foolishness. I’d love to point up to the Great White North and scoff at their lack of manliness, their limp-wristed PCisms, their mindbendingly idiotic paean to “feeealwings.” Yes, I’d love to say that no American would ever stoop to such milquetoastiness. Unfortunately, Politically Correct halfwits infect both sides of the border, up there and down here alike, and we in the States have just as many numb-chucks as the Cannucks have Cannuckle-heads.

As reported by Canada’s National Post[1] the Gloucester Dragons Recreational Soccer league is valiantly trying to improve the obviously low self esteem of its players. The idea is “intended to dissuade a runaway game in favor of sportsmanship.” And so, any team winning by more than five goals will lose by default.

I see no reason to have sports at all in the 21st century if this is the idiocy that sports leagues resort to. Why put all the money and effort into sports if there is no true determination of excellence? If there is no great height to which to aspire, what is the point of bothering?

Every kid that has ever played sports for more than a few seasons will remember that one team that just creamed everyone. And not one of these kids are spineless mounds of jelly unable to get out of bed as a result of being confronted with such winners. And if any are, sports are the least of their worries as they have mental problems far and beyond having lost a soccer game or two.

With a world of enemies sharpening their scimitars in glee over the weakness they see in the west, we are raising kids to feel so afraid to be beaten in a soccer game that we have to shield them from the gut wrenching humiliation by eliminating the possibility that they might lose a silly kid’s game. What will happen when they are faced with the real world in all its harshness?

No wonder radical IslamoNazis see the west as a weak horse.