‘The Dope Man is Out Of Business’: Police serve notice to drug users by posting note on suspected dealer’s door [Video]

Well, the police may not have been trying to be funny, but this is hilarious[1]. The best humor, indeed, is cop humor. What’s not so funny is the moron doing the dealing. He didn’t even try to hide it. He had lines out the front door and labeled his goodies with stealthy titles such as “crack” and “weed.” This mental giant must have been sampling his own wares a bit too much. Just sayin’. The Dopeman is now out of business and good riddance. 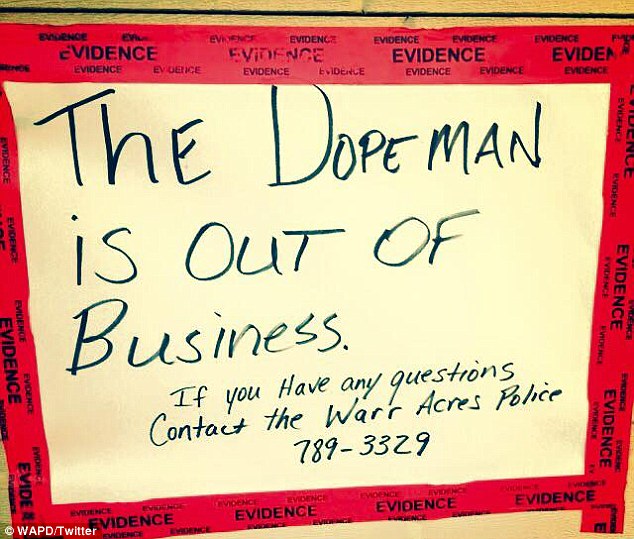 The Warr Acres Police Department posted this note at the home of a suspected drug dealer in Oklahoma.

An Oklahoma police department wants drug users to know ‘the dope man’ is done dealing in their town.

Officers from the Warr Acres Police Department posted a note on the front door of the home of suspected drug peddler Aaron Phelps after they arrested him.

The message read: ‘The Dope Man is Out Of Business.

The department was hoping to serve notice that drug use would not be tolerated in Warr Acres.

According to neighbors, there were people coming and going from the 19-year-old’s home ‘at all hours of the day and night’ and there was even a ‘waiting line’ outside the door at times.

A search of the house turned up drug paraphernalia, a digital scale, a hand-drawn picture that said ‘WEED,’ and substances believed to be drugs, News 9[2] reported.

One of Phelps’ neighbors said the sign was ‘kind of bad’ but also ‘hilarious,’ KFOR reported.

He wasn’t the only one who found it funny.

After the department posted a photo of the sign on Twitter – only the WAPD’s third tweet ever – social media users began sharing and commenting about it.

They tagged the post with: ‘WAPD Criminal Investigations Unit shutting down another dope house in Warr Acres! #whosenext #wewontstop.’

The Oklahoma County Sheriff’s Office re-posted the image on Facebook.

Warr Acres Sergeant John Gray said that although some found the sign funny, the department ‘didn’t mean it as a joke’ and takes the situation very seriously.

He said: ‘We wanted the citizens to know that we’re doing everything we can to make their neighborhood safer for them and for their children.

‘If we have information that there’s narcotics activity within our city limits, we will do everything we can to shut them down.’

Phelps is being held in the Oklahoma County Jail on a $15,500 dollar bond, according to reports.

Sounds like the police in Warr Acres won’t stand for druggies and their antics in their town. Good for them and it is vintage Oklahoma. The police in this state are polite and very, very good at their jobs. They are one of the things I like about the state. I would suggest criminals find a more Liberal state to set shop up in. Unless of course you want to tango with the boys and girls in blue and experience a paddy wagon first hand and then a lengthy stay in a cell with some very, very close friends.