Evil: 3 yr-old girl found beaten to death by her mother, in a pool of her own vomit [Video]

Bless this little angelic girl’s heart and soul.[1] And damn her parents to hell for this. The mother and boyfriend beat three year-old Jettie to death. Punching her over and over again in the abdomen, stomach and head. They beat her so hard, they ripped her intestines apart. Jettie must have felt ill and crawled out on the porch, where she laid down on a mattress a died all alone. She was found the next morning by these monsters, lying in a pool of her own vomit. They called an ambulance, but it was far too late for that. Jettie was gone. The Sheriff will charge both of them with Capital Murder and I hope they both get the death penalty for what they did to this little girl. No punishment would ever be severe enough for what they did to her. 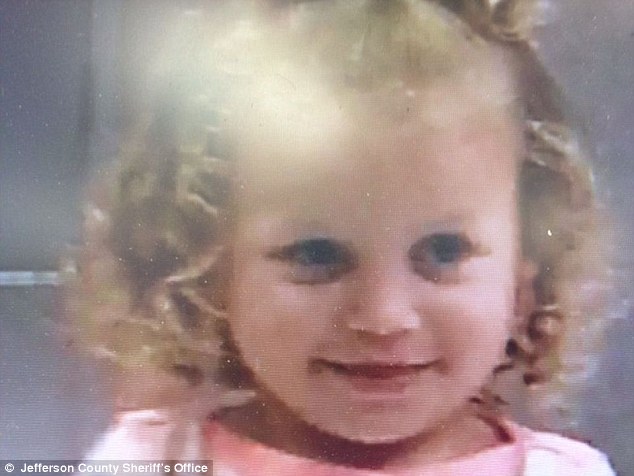 Jettie Ray Adams (above) of Trafford, Alabama, died Monday morning shortly after she was found unconscious in a pool of her own vomit.

A young girl was found dead outside her home on Monday morning.

Jettie Ray Adams, 3, of Trafford, Alabama, died as a result of severe internal injuries and was found in a pool of her own vomit when medical personnel arrived on the scene.

Her death has now been ruled a homicide, and the girl’s mother, Misty Lynn Wright, and her mother’s boyfriend, Johnathon Wayne Talley, have been arrested on charges of aggravated child abuse with severe injuries.

Those charges are expected to soon be upgraded to capital murder.

AL.com[3] reports that Wright, 23, and Talley, 39, called authorities Monday when they found Jettie unconscious laying on a mattress on the porch.

She was rushed to to Children’s Hospital where she was pronounced dead.

Chief Deputy Randy Christian says that after examination it was determined that the young girl’s injuries were the result of repeated blows to her abdomen, chest and head.

There were several other children at the home who have now all been placed in protective custody and show no signs of being injured.

‘When the person that is trusted with protecting a child turns out to be the abuser of them, it is as sickening and as bad as it gets,’ said Christian.

Both Wright and Talley have had run-ins with the law, though Wright’s was just a simple failure to appear earlier this year after a string of traffic violations.

Talley on the other hand has been arrested for possession of both methamphetamine and cocaine over the past 10 years, as well as public intoxication, resisting arrest, theft and trespassing to name just a few.

He also has repeated convictions for driving with children who were not properly secured in safety seats.

His cocaine and theft arrest in 2004 landed him in prison for 10 years, though it is not certain how much of that sentence he actually served.

Investigators are now calling Jette’s death one of the worst they have ever seen.

‘I really don’t know how someone is capable of abusing a fragile and innocent child in any manner, but to continue to the point of injury and death is beyond anyone’s comprehension,” said Christian.

‘Those responsible have been identified and arrested and our job now is to ensure they will not see the light of day again and they will never harm another child.’

He then added; ‘God bless, love and hug this poor little girl. She was never given a chance to learn that her life was not supposed to be this way, that it wasn’t her fault, that this isn’t how children are supposed to grow up.

‘It gives a little more meaning to say she is in a much better place now.’

The boyfriend served time for doing meth and cocaine and a whole host of other crimes. The mother has a much lighter record, but you can tell what a class act she is by who she hooked up with. The police say that Jettie’s beating and death are one of the worst they have ever seen. None of the other children showed signs of abuse and have been removed from the home. I guess this poor little girl held special interest for the two demons masquerading as her parents. This is pure, unadulterated evil. Jettie has gone home to God now, where no one will ever hurt her again. One can only hope that the mother and boyfriend will get justice and pay the ultimate price for doing this to a child. This is not the way it should be for any child – ever. 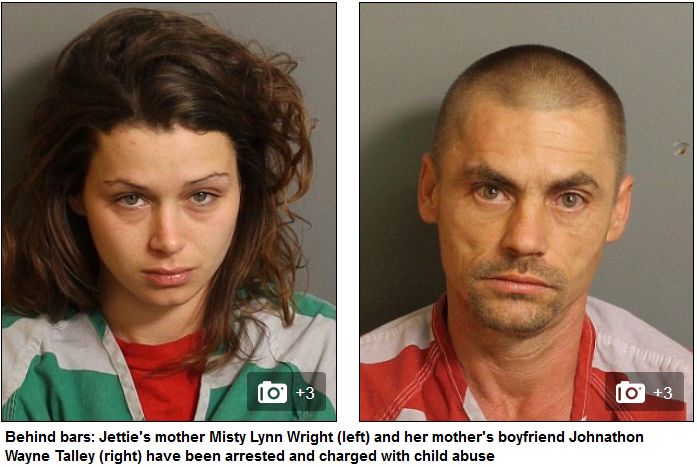