Facebook Picture Emerges of Horribly Beaten 18-year-old in Prison Cell with His Eye Swollen Closed, On A Leash with Two Men Over Him

A photo that surfaced on Facebook, showing a young man, badly beaten, and with a leash around his neck, has his mother demanding immediate action. Cortez Berry is an inmate at Buruss Correctional Training Center, and is only 18 years old. While prison beatings are certainly nothing new, the shocking actions of corrections officials will have your head reeling. Daily Mail [1]reports: 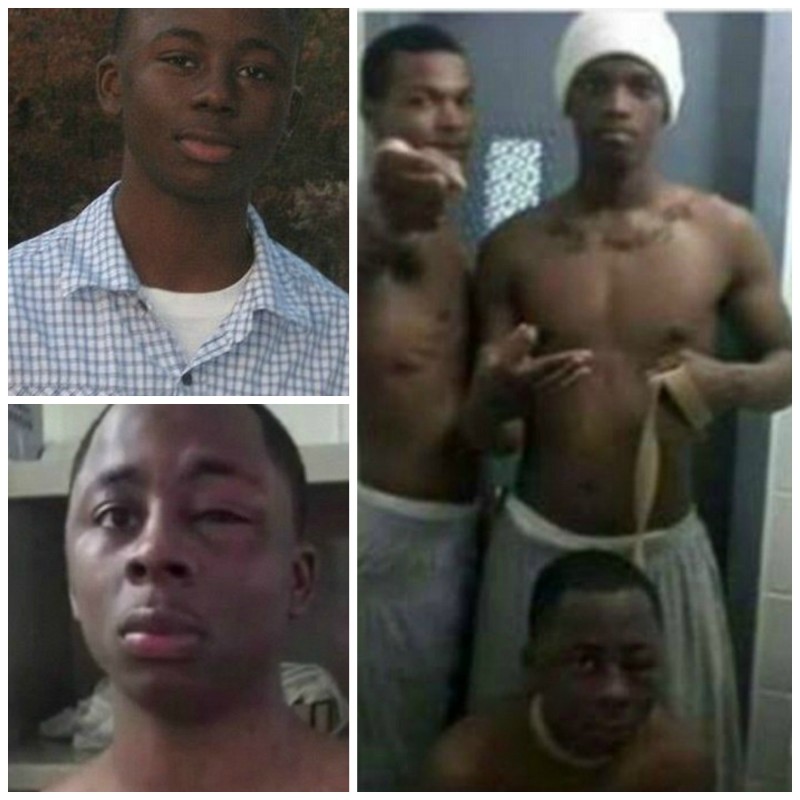 In the disturbing photo which was uploaded to Facebook on Friday, Berry can be seen hunched down with a swollen eye in front of two shirtless young men, one who is holding the leash.

‘I was like oh my God! What happened? How’d it happen? It’s a terrifying picture to see,’ Berry’s mother, Demetria Harris, told WRDW.

Berry was visited by his aunt on Saturday and he told her that he had been jumped by ten people who beat him and ‘choked him to sleep.’

‘Pretty much they left him there for dead,’ said Shavondria Wright.

‘No one deserves this,’ said Harris. ‘They’re not being protected. I don’t care what they’re there for, they still need to be protected.’

The attack also appears to be gang related.

The caption of the photo posted on Facebook reads: ‘When you disrespect the Nation, it brings nothing but pain and suffering.’

That is understood to be a reference to the gang, G.D. Nation, short for ‘gangsta disciples.’

The Department of Corrections is carrying out an investigation into the incident and has the area of the center where the photo was taken under lockdown.

Inmates are not supposed to have access to cellphones.

Berry is serving an 8 1/2-year sentence for aggravated battery, robbery and theft of a motor vehicle.

He was transferred to the medium security detention center last year after violating his probation.

His family say they want an assurance from the department that he will be able to pay his debt to society, without being killed.

‘We could’ve lost him. He could’ve been dead. Especially when they hung the belt around his neck. He could’ve just been gone,’ said Wright.

So. Who is going to tell how these inmates got access to a cell phone and Facebook? Why did the guards leave him alone for so many hours? I am all for people serving their time for the crime, but this particular system seems to have a few missing pieces to it. Why are cell phones being allowed? How are these men allowed to put a leash on and beat a man?

This is disgusting. No one should have to ask for their family members to be assured life to finish serving a prison sentence. Just wrong, folks. Plain wrong.