Final Landing of the USS Enterprise

The experience of watching the space shuttle Enterprise circle New York City on its way to JFK Airport can be described in many different ways. One of the words viewers most frequently used about the sight was “bittersweet”. As Enterprise piggybacked its way on a 747 to its final landing, Americans turned out in large numbers to view the flight. The predominant mood was nostalgia. 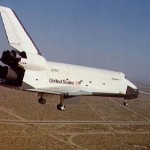 [1]Originally named the Constitution, the first space shuttle was re-named Enterprise, thanks largely to a huge write in campaign by fans of the enormously popular sci-fi TV show Star Trek. Gene Roddenberry’s forward thinking, imaginative story lines and precedent-setting casting inspired many to dream of an expansive, high-tech future where virtually anything was possible. Even flights around the galaxy, seeking out new life and new civilizations.

How ironic that the final flight of the Enterprise would take place when a people, so capable of great achievement, have no concrete plans to continue manned journeys into the final frontier. 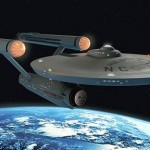 [2]The situation is very reminiscent of Stark Trek episodes, where Captain Kirk, Mister Spock and Doctor McCoy encounter civilizations enjoying the advantages and pleasures of a high-tech world left behind by their extremely knowledgeable, highly advanced ancestors. The problem was, their ancestors had evolved to such a level that the equipment they left behind took so long to break down that anybody with the knowledge to design, build or even fix the machines had long since passed. Fortunately for those lost civilizations, the brave crew of the USS Enterprise was there to come to the rescue. One might venture to guess that had the crew of the USS Enterprise been around to bail them out, civilizations in earth’s own history might have been saved. Had the knowledge, skill, ambition and drive of those who built civilizations in Greece, Persia, Egypt and Rome not been allowed to erode, the Dark Ages might never have happened. But, the USS Enterprise was not there to save them.

The USS Enterprise. Ponder that for a moment. That’s not much different from U.S. free enterprise, is it?

America should take note. With “progressives” evidently intent on destroying America’s free enterprise system and culture; replacing them with big government crony-socialism awash in a culture of corruption, America’s civilization teeters on the brink of erosion, decline and eventual collapse. Oh sure, people who call themselves Americans will continue to live on the same piece of land. Even the name of the country will probably remain intact. But what makes America exceptional will be lost. How much longer can America’s economy and culture withstand the full bore onslaught of big government power grabs, unaffordable debt and deficit spending, cultural over-reach, intentional misinformation, false accusations and outright lies being unrelentingly foisted upon them, with malice of forethought, by the institutionalized “progressive” left?

These anti-America forces, funded by the likes of George Soros and his ilk, enjoy “intellectual cover” from aging counter-culture hippie-freak college professors. The beat-down muscle and numbers needed to enforce their agenda are found in the big unions. The big Hollywood movie message machine, along with the “mainstream news” media work overtime to indoctrinate the unsuspecting masses, while symbolic, useful pawns like occupy Wall Street are fully and openly embraced by the highest ranking members of the “progressive” Democratic Party.

The institutionalized “progressive” left is relentless, determined, well funded, organized and extremely aggressive. Their views of America are not fondly nostalgic. Some may have even cheered the final flight of the Enterprise with the same glee that 9/11 was celebrated by Islamo-fascists in the Middle East. And for reasons that are not dissimilar. Some may have toasted the final flight of the Enterprise as an enduring, meaningful symbol of the decline of American civilization. Their goal is to bring about, by whatever means necessary, an end to what President Abraham Lincoln called “the last best hope for man on earth”.

And the crew of the USS Enterprise isn’t here to bail America out.